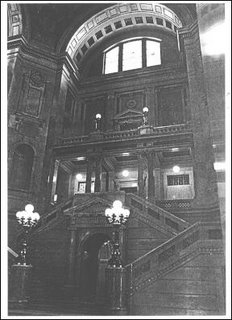 Our two Luzerne County Commissioners, Greg Skrepnak and Todd Vonderheid, who along with their army of consultants who came up with the Orwellian sounding "Life Transition Plan" hired back a bunch of people who were supposed to be let go. But the kicker is they are not on the county payroll but work for a temp service. So in addition to paying them the same salary the county is paying a premium to the employment service. And they won't tell us the names of the people who are being retained. They floated another bond to finance this plan that will cost $23 million over 15 years in the hope of saving $2+million if salaries are kept in check. How much debt can we take on!

The returning retirees – there are 23 – must receive their old pay rate, so the county is paying OneSource Staffing Solutions that amount plus an additional 19 percent for clerical employees and 30 percent for road maintenance workers. OneSource receives a commission and uses the rest of the surcharge to cover employee-related costs such as workers’ compensation, unemployment tax and Federal Insurance Contributions Act payments.

I said our two county commissioners as the the third one, Steve Urban, is still being shut out of decisions.

Urban voted against hiring OneSource, saying he was not given a copy of the contract as he requested, and he believes it would be cheaper to pay the retirees directly, especially because the county tends to get a good workers' compensation rate through its self-insurance.

"Even I don't know who they've brought back," Urban said.

Chris and Ramah Hackett own OneSource. Someone needs to check Skrep and Vonderheid's campaign finance reports and see how much they donated to their coffers.

I know for a fact that the Hackett's are supporting Lisa Baker in an attempt to land some more fat contracts with the State.

Their names were on Lisa's invitations for her $150 cocktail.