Rep. Lou Barletta (R) keeps disappointing us. In this whole budget mess he sounded almost reasonable but has reverted to making unreasonable demands for his vote to fund the government and raise the debt ceiling. He voted at first to defund Obamacare and  then to delay the ACA like the rest of the Republicans. When that didn't work out and the government shutdown came along  Lou made a few lists of people willing to vote for a clean continuing resolution but that didn't last long. . Now he wants a repeal of the the tax on medical devices in exchange for his vote to fund the government.

The Republicans complain that the Democrats won't negotiate but there is no need to as the Republicans keep negotiating with themselves. They started off with defunding the ACA , then delay it and now will settle for a repeal of one of the taxes that fund it.

It's a weak position. I suppose the Dems could let them have a vote on the device tax with a promise it will pass the day after they pass a clean CR as way of saving face.

This is more of a worry.

WASHINGTON – Congressman Lou Barletta, PA-11, today called for a Constitutional amendment to require a balanced federal budget as a trade-off for raising the nation’s debt limit as requested by President Obama.

The balanced budget amendment sounds good but it is nonsense. Government finances are somewhat complicated so who decides that the budget is in balance? Will accounting ledgers go to the Supreme Court that will rule on the question 2 years later? The Constitution is about rights and processes not specific policies.

You can argue about the budget but raising the debt ceiling is non-negotiable. 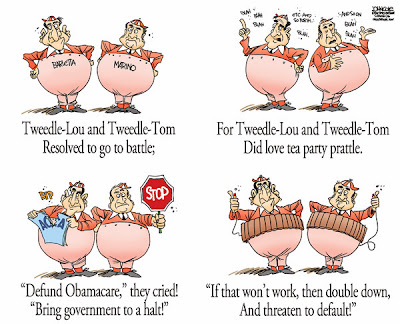 Ask the good Congressman and his sidekick where he will find the $60 BILLION dollars to replace the revenue that would have been generated from the medical device stream. Or is he willing to add it to the current debt?
I heard Congressman Barletta is still trying to find where the bathroom is in the Capital. hmmmmmm
i would bet between the RINO ads going out against him along with the medical device lobbyist hitting him up made him turn like the JV congressman he is.........

Barletta's a dumb hack. IT takes about as much intelligence to run Hazleton as it does to run Wasilla.

Typical GOP, world is only 5,000 years old, aborition is immoral, but funding children's food programs is not, Republifruad.