I know no one reads this blog anymore but I decided to write up the 120th candidate forum so I can post a link to Facebook. 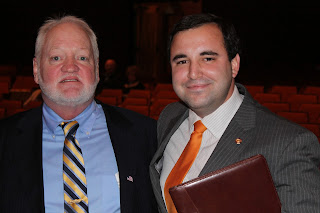 About 50 people attended which is about what you get for these things. The TL and CV sent reporters and Service Electric taped it. It can be seen on channel 2 on Monday.

Bob is a first time candidate and Aaron is an experienced politician and it showed. Kaufer was well rehearsed and confident in his answers speaking into the microphone while McDonald sometimes rambled and sat 2 feet away from the table/mic. I hope the TV audio  picked him up. In his opening statement Kaufer said that good policy makes for good politics. That's something  Bill Clinton said. McDonald said we are about to elect our first woman President and talked about dignity.

People in the audience submitted questions and you can tell who planted the most.

They both agreed that anew approach is needed to the opioid crises. Bob stated that addiction is not a moral failure but a medical problem. Aaron said there s no silver bullet to solve this problem and is part of the HOPE caucus .

On HB76 Bob said eliminating school property taxes is not going to happen and said people who keep promising that are like Lucy holding the football. Aaron then gave an impassioned defense of eliminating property taxes saying the legislature passed a constitutional amendment that I haven't heard about providing a 100% Homestead exemption. The audience applauded.

They both agreed that discrimination against LBGT people is wrong. Kaufer cited his gay brother Seth.

On term limits Bob got a laugh saying that he thinks that Aaron should be limited to 1 term. Aaron invoked George Washington cautioning against political factions and said he wears an orange tie to show his support for reform.

Kaufer said that Unemployment compensation is too generous and voted to reduce it and regulations should be pared back. That left an opening for McDonald to argue that the frackers are just as bad as the coal companies.

After the event I asked Kaufer what he thinks of his party's Presidential nominee and would he vote for him. He said he had his own race to run and would not say if he would vote for Trump.
Posted by Gort at 12:02 AM 4 comments: 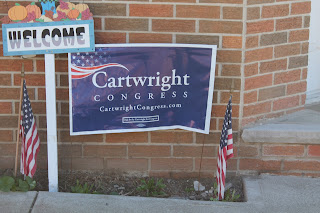 Mrs. G has been bugging me to get some Hillary yard signs to display because some of our neighbors have Trump signs but we haven't seen any Clinton/Kaine signs . So being a dutiful husband I dropped by the Hillary HQ in Wilkes-Barre today to pick up a few. I explained that we are being outnumbered in Plains and and a young person helpfully explained that yard signs don't vote. Gee, I didn't know that. So they asked me if I would be willing to help out and I said OK. Then I was asked to do some canvassing every weekend until the election but I couldn't commit to that. I was told if  I would commit to a couple of shifts they would allow me to have 2 signs. When I objected to that they told me to go on the website to get a sign. Needless  to say I walked out without a sign.

I have worked for a lot of campaigns and have never subjected a potential volunteer to such a hard sell. The condescending attitude of the person I dealt with was off putting. Without asking anything about my background  I was informed of the definition of  GOTV and how voter contact can make a difference. Gee, I didn't know that either.

Maybe I'm just getting cranky but if this is what they have going on in a key county of PA. God help us.

Anyway, We have a sign in the yard for a candidate we enthusiastically support.
Posted by Gort at 6:46 PM No comments: