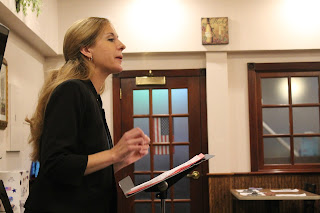 Judy Herschell had a rally  tonight that attracted an overflow crowd and did not mince her words.

She said that healthcare is a basic human right and blasted the profit driven health care system and endorsed Medicare for All.She said she would not sell out to Pharmaceutical companies. Unions are essential and teaching is a noble profession.

She also addressed the mechanics  of the race. She needs a bunch of money and many volunteers. It will be hard to beat Tom Marino.

The Voice of God was reaffirmed as the President for Life of The People's Republic of Bear Creek Village winning 98.82% of the vote. He was so sure that his apparatchiks would deliver an unanimous vote that he was on a cruise on election day visiting his offshore accounts. The lone dissenter will be sent to a reeducation camp in Nescopeck Pass.

The incumbents were not reelected. Jack Mundie and Professor Obvious finished last in a six person race for 3 seats. My guy just missed. John Keegan and I are joined together as fellow bloggers who will argue about about everything then go for a drink. He is really good at research and would be an asset to any organization. Allison Barletta won a seat, where I have heard that name?

Some selected results from some down ballot races that I had an interest in because friends of mine were in the running. Spoiler alert, most of them lost. Sometimes I feel like the black cat of politics.


Longtime Kingston resident John Cordora ran for for Mayor of Luzerne as a Democrat. John has been a Republican candidate for State Rep and Mayor of Kingston. I always found him to one of the more entertaining people on the local political scene. He was always a good sport taking my snark in stride even when I said he resembles Vincent Price.

Luzerne County Young Republican Prez John Lombardo  made his first run for elective office as a candidate for the Pittston Area School Board. It was just a matter of time before we saw his name on the ballot and it won't be the last. He's been a guest blogger on Gort42.   John is a lot like the young Gort becoming a political junkie at a young age.  He ran a great race and came close.

Keep an eye on what goes on in Kingston Township in the near future. I predict they are heading for  all sorts of legal challenges involving sunshine law violations and of conflicts of interest. The winning candidate is the son of of one of the present Supervisors who works for the township  road
Department.

Liz Martin has been a hard working public servant who deserved reelection.


My candidate came up a bit short but I am very proud of the race Wendy Cominsky ran. She is someone without money or powerful friends who just wanted to make a difference. She offered solutions to the problems the county faces and worked as hard as any candidate I've ever met. I'm grateful for her friendship and trust. She came darn close and somehow I feel I let her down.

The top 3 vote getters was not a surprise. Incumbents Linda Houck(D) and Harry Haas(R) ran their record and the people rewarded them with another term. Sheila Saidman was top of the poll in the primary and it carried over.

The surprises of the night were Matt Vough (D) and Chris Perry (R). They also worked their tails off and I saw them just about everywhere.

The great thing about this election was the lack of acrimony.  For the most part the candidates seemed to genuinely like each other and want to work together regardless of party

I want to congratulate all the candidates for offering themselves for public office. It takes guts to run and put up with the nonsense like the anonymous cowards who comment on the local newspaper websites. 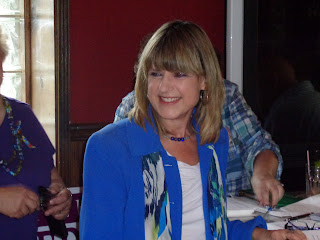 Wendy Cominsky is someone who want's to do something. She has all sorts of ideas to improve Luzerne County. I may not agree with all of  them all but let's put them out for discussion.

Wendy Cominsky for Council
A snippet: 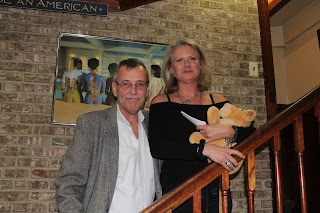 We also should be considering alternative energy as well as protecting what is left of our natural resources. Apparently some people did not learn their lesson from the coal companies. Tunkhannock is seeing a dramatic drop in local business since the gas drilling craze is fading. When we run out of gas, like the coal mines, those companies will be gone and many people will be without jobs and many businesses without customers. This can cause economic collapse and we need to prevent it. Everybody was sold on gas because it would bring jobs to the area and lower energy costs. Here’s the exciting news: so will the development of renewable energy sources! By shifting our focus to renewable energy, we will lower costs and still have fossil fuel energy to rely on in times of crisis. Environmentally speaking, I believe that clean water will become more valuable than gold in the not so distant future. We absolutely need to protect our natural springs as if they were our children, because frankly, our children will pay the price if we don’t.