The return of Blogfest 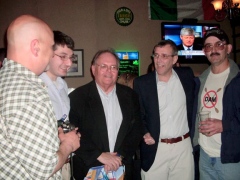 It was so much fun in the past people have been asking us to do it again. Started as an informal political mixer it became a networking event for bloggers, voters and political candidates.

Past events have drawn crowds of 100 to 150, including political and non-political bloggers, politicians from every party as well as independents, and those curious about politics and blogging.

Since its inception Blogfest has been described as the best political event of the season. The rule is "agree to disagree, but don't be disagreeable." Many local and statewide candidates will be attending. All are welcome, and there is no charge for admission.