I think I have have watched every inauguration since 1972. Since 1800 when Jefferson took over from Adams this country has witnessed the peaceful transfer of power or continuation without a shot being fired as Senator Lamar Alexander reminded us today.

There are 2 pageants of American government,  this and the State of the Union speech.

Nixon, Carter, Reagan, Bush, Clinton, Bush and Obama in my lifetime. The speeches escape me.

Why some people who profess to be patriots and Constitution adherents would boycott the day is puzzling. You lost an election so go get them next time. 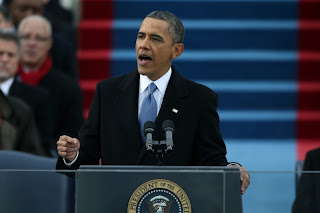 Aggie, Joe, CPC and many others have wondered why I haven't posted lately. Thank you for the encouragement and concern. I had an illness that I wouldn't post on Facebook and just got into my midwinter funk with the resulting writers block,  that and playing too many video games.

CPC told me that YouTube Weekend is his 2nd favorite feature just behind Polka Friday on WILK so here is a song from one of his favorite artist.

Don't be a drag Just be a Queen.

President Obama was sworn in for a 2nd term. \\

My bride has also pointed out that I have neglected her .

Larksville resident Renee Ciaruffoli-Taffera is the first candidate to announce a bid for Luzerne County Council. CV: She was an active member of the "Friends of Home Rule" campaign committee and aggressively campaigned for the successful adoption of the charter. Since then, she has attended and participated in more than 160 meetings and forum events.

She has been a regular at council meetings raising concerns about the prison K-9 unit and advised that the county should ignore the Affordable Care Act until it's fully implemented in 2014.

On her website Renee4council.com she lists 45 cost savings ideas.

17.   Eliminate Passport Office, it's a Federal mandated function, not County (not a profit center)

19.   Lease moon lake pool to a for-profit organization (get a piece of the action)

29.   Have employees pay a greater share of health benefits.

37.   Eliminate monthly fee for Kronos system and get rid of it all together.

She is running for a Democratic nomination.

5 seats on the Luzerne County Council are spot are up for reelection next year. Democrats Elaine Madden Curry and Linda McClosky Houck and Republicans Harry Haas and Eugene Kelleher along with Independent Rick Williams were the bottom 5 of 11 elected in 2009 so their seats are up this time. The other 6 seats will be decided in 2015.

I don't agree with the system but this is the game of the year in College Football. I still haven't got over the 1975 Sugar Bowl. 4 times up the middle.

Go Irish beat the Tide.
Posted by Gort at 7:31 PM No comments:

DUNMORE - Pennsylvania State Police at Dunmore reported that a 22-year-old woman drove from Dickson City south to Laflin on Interstate 81 North at about 5:37 a.m. on New Year's Day....The driver, identified as Paige Cicardo, 22, of Azalea Drive, Albrightsville, was arrested under the suspicion of driving under the influence and reckless endangerment.

Another reason to stay off the roads on a holiday. Fortunatley no one was  hurt.

Thanks to Michelle for pointing this out.
Posted by Gort at 4:10 PM No comments:

Some genius using the handle "WBYup" has been leaving inflammatory comments on the Times-Leader and Citizens Voice websites over the last few weeks and Luzerne County Controller Walter Griffith has had enough.  The jerk is just probably blowing smoke and thinks he/she is being funny in a sick way but the threats have been referred to DA Stefanie Salavantis by Griffith and Brian Shiner.

TL: One comment that appeared on The Citizens’ Voice website read: “I wish you and Walter were dead!” on Dec. 28th. The comment has been deleted. WBYup also said Shiner was a “DOG” and promised to “tear into” several county council members “like you cannot imagine” if they run for re-election this year.

This is not an isolated incident. On the 12/19 CV story about Jim Brozena retiring WBYup had these enlightened insights.

5 seats on the Luzerne County Council and the Controller's spot are up for reelection next year. Democrats Elaine Madden Curry and Linda McClosky Houck and Republicans Harry Haas and Eugene Kelleher along with Independent Rick Williams were the bottom 5 of 11 elected in 2009 so their seats are up this time. The other 6 seats will be decided in 2015.

In this story by Jennifer Learn Andes in the TL none of them definitely said they will run again but they all sound like candidates. The new form of government is a work in progress and except for 2 members the council seem to be trying to make it work. It will take a few more years to iron out all the kinks and these people want it to work.

This time around we will see plenty of candidates starting to circulate petitions starting Feb. 19th but fewer 3rd party and independent bids.

Republican candidate in 2011 Kathy Dobash sent this along:

Many left because of their age and I still recall the words: "Shame on you!"
The 2012 budget contained a tax increase.  Was it really necessary?  The 2013 budget gave a $1,000 bonus for non union employees.
Mr. Lawton was late presenting the 2013 budget and did not comply with the Home Rule Charter.  The 2013 budget revenues are questionable.  It is highly likely the revenue will not materialize without future borrowing.  I have seen Mr. Lawton keep County Council members in the dark about issues facing Luzerne County.  Updates must be provided by the County Manager on County business as required by the Home Rule Charter.  Why is the Charter ignored?
Throughout the year there was much discussion about the County debt, however the majority of Council has continued to spend Bond money without a plan.  Many Council members complain about the County debt but foolishly spend over $30 million of Bond money left over by previous administration.  They raised taxes and gave out bonuses. This sounds like tax the people and spend their money to me.
I will continue to attend Luzerne County Council meetings in 2013.  I will question our County officials on issues important to the residents of Luzerne County.
Happy New Year to the all citizens of Luzerne County,
Kathy Dobash
Hazleton, PA
Posted by Gort at 4:15 AM 1 comment:

The Senate passed the fiscal cliff deal 89-8 and now it's up to the House to ratify it so we can move onto the next manufactured crises like raising the debt ceiling. I have every confidence that the House of Representatives will find a way to screw this up.

One crises after another that could be avoided if Congress would just do it's job. Many of my friends like to quote the founding fathers to justify the obstruction of the Republican party in the House and Senate but they forget  that our system of government is designed that no one person or group of people can get their way all the time. You have to make a deal.  See the Connecticut Compromise.