“I applaud President Obama for agreeing that it is imperative that he consult with and receive the authority of Congress before taking military action against the Assad regime in Syria.  America is at its strongest when proper channels are followed and the nation speaks with one voice.

“I look forward to examining the case the president said he would lay out, including important intelligence involving the use of chemical weapons in Syria.  I am also interested in hearing what overriding American national security interests are at stake to make it appropriate to engage in military strikes.

“There are many concerns involved in the debate.  Rogue nations have threatened to attack Israel in retaliation for any American action.  There is also the very real fear that Al Qaeda is heavily involved with the rebel forces which would seemingly benefit from our intervention.  Finally, it is troublesome that even our closest ally, Great Britain, has rejected participation through a vote of its Parliament.

“I will take all of these factors into account as I determine whether I will vote to authorize the use of force in Syria.”
Posted by Gort at 4:43 PM 2 comments:

No war in Syria

The President just asked Congress to approve a strike on Syria. I hope they say no.

For once the GOP can obstruct him on something that matters to the country and not just to the yahoo's.
Posted by Gort at 3:58 PM 4 comments:

It looks like I have a bit of a scoop and didn't realize it. State Treasurer Rob McCord is running for Governor although he hasn't made an official announcement yet. McCord was at Yuddy's picnic yesterday and looked and sounded like a Guv candidate. KP picked up on a subtle change to his website today. 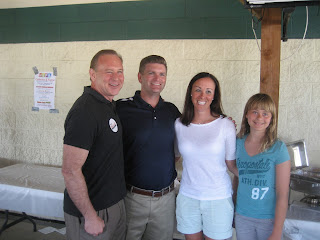 My second favorite PA State Senator had an event at the PAV in Plains Twp. today. What a turnout! You couldn't find a parking space in the lot. There had to be a least 500 people who came and went.

2 statewide candidates showed up. Mark Smith is running for Lt. Gov and Rob McCord looking to take the place of Gov. Corbett.  I think McCord just got into this thing. Lot's of locals pressing for votes Eddie Day and Mike Carrol looking to next year. It looked like every Democratic candidate for County Council was in attendance. Eileen Sorokas , Kick Hefron, Mike Giamber, Renee Ciaruffoli-Taffera 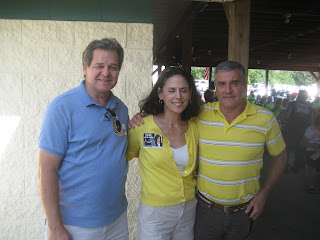 I reminded them all that we have Blogfest coming up September 27th.

More pics at this link
Posted by Gort at 7:18 PM No comments: