Meuser at the Grotto 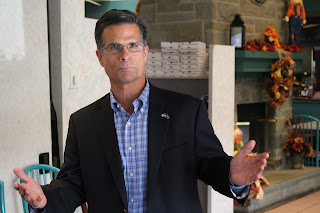 Tens of people came out to hear former PA Revenue Secretary and unsuccessful 2008 PA 10th CD Republican candidate give his pitch for electing him to the 11th CD seat being vacated by Lou Barletta.

Luzerne County GOP Chair Ron Ferrance did the intro saying we need someone in Congress that will support the President. Other notables in attendance were State Rep. Karen Boback, Bear Creek Village Mayor Walter Mitchell, the next DJ in the back mountain Brian Tupper, Old Forge School Director Frank Scavo and Luzerne County candidate Marc Dixon.

Meuser tied himself firmly to Trump and Barletta.

Meuser said he was a conservative problem solver who wants to get behind the President's Make America Great Again (MAGA)  agenda. Tax reform, repeal Obamacare, strong military, border security, term limits and drain the swamp (DTS) , etc. He said he was urged by Barletta to run for Congress if Lou ran for Senate. The way he explained it was almost like a Quid pro quo.

I was surprised by how much he discussed the nuts and bolts of the campaign. Everything from yard signs to money. Meuser said he was outworking the other candidates and claimed the support of 8 GOP county chairs. He said he will need $750,000 to win the primary.

He took some shots at Democrats saying the Republicans are the party of the red, white and blue who's favorite holiday is the 4th of July while the Dems celebrate April 15th. Senator Casey has gone extreme left and brought up Nancy Pelosi.

At the end someone asked him about combating the lies that politicians tell. Meuser said he would give them a pass the first time but would lose his support if they did it again. Then he went on about draining the swamp and MAGA.

Maybe he should read this fake news article:

Updated July 21: The president is still lying, so we've added to this list, and provided links to the facts in each case.

Another Democrat has joined the race to succeed Lou Barletta (R) in the PA 11th CD. He joins USAF vet Alan Howe on the Democratic side.

Wolff was PA Agriculture Secretary under Governor Ed Rendell. He was appointed by  President Clinton and held over by Dubya on the WTO Agriculture Technical Committee.

From his website :In addition to his farm work and public service, Denny is the proud founder of Camp Victory, a camp for children with special needs that’s adjacent to his farm. The camp today hosts over 1,500 children and their families from across the country each summer. Denny was inspired to start Camp Victory after his youngest son, Nicholas, was born with a life-threatening liver disease and spent most of the first two years of his life in hospitals until he received a lifesaving liver transplant when he was eighteen months old.


This report in the WaPo is shocking but not surprising. PA 10th CD Congressman Tom Marino (R) took $150,000+ from pharmaceutical companies then wrote a law to get the Drug Enforcement Agency (DEA) off their backs.

For years, some drug distributors were fined for repeatedly ignoring warnings from the DEA to shut down suspicious sales of hundreds of millions of pills, while they racked up billions of dollars in sales.
The new law makes it virtually impossible for the DEA to freeze suspicious narcotic shipments from the companies

This tells you every thing you need to know about Marino. He called the cops when reporters wanted to interview him. Marino declined repeated requests for comment. Marino’s staff called the U.S. Capitol Police when The Post and “60 Minutes” tried to interview the congressman at his office on Sept. 12.

This is nothing new. He has helped drug dealers in the past.

A prominent central Pennsylvania car dealer once described as a “friend” by former U.S. Attorney Tom Marino has racked up an extensive rap sheet since leaning on Marino to have a cocaine dealing conviction cleared from his record more than a decade ago, court documents obtained by The Citizens’ Voice show.

Jay W. Kilheeney, an admitted drug addict and alcoholic, has been busted three times since Marino clumsily and unsuccessfully interceded in the drug case, in June 1998, and has been accused in protection from abuse petitions of leading a violent, vagabond home life.


His lies about his relationship with Louis DeNaples and permission letter from the DOJ.

Tom Marino, Republican candidate for Congress, has changed his story six months after he told a Wilkes-Barre talk radio reporter that he had gotten permission from his superiors in the U.S. Department of Justice before lending his name as a reference for a convicted felon who was seeking a casino license...He also denied that he had ever claimed that he received, or could provide, written authorization from the Justice Department allowing him to give a personal reference to former casino operator Louis DeNaples.

Even the Bush Administration thought he was incompetent

D. Kyle Sampson, the chief of staff to then-Attorney General Alberto Gonzales, subsequently placed Marino's name on a list of U.S. Attorneys he said the department, "should consider pushing out," based on "problems" he learned about in summer 2006, according to the report.
You can read the report at this link.

And he is such a charmer with the voters

Another great Blogfest was held at the River Grille in Plains. In addition to the political types NEPA Blogcon joined us for their after party. There is always a prize for the person who traveled the farthest and this time it goes to PA Lt. Governor candidate Aryanna Berringer who came all the way from Pittsburgh. Aryanna is no stranger to our area, she lived in W-B a few years ago.

Two 11th Congressional District candidates also traveled a bit. Democrat Alan Howe from Carlisle made another appearance in the area and Republican Andrew Shecktor left the wilds of Berwick to
join us.

The NEPA Blogcon group were a lot of fun and added energy to the gathering. 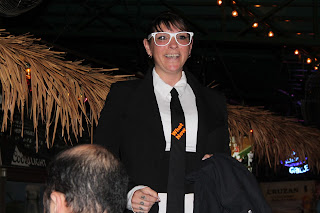 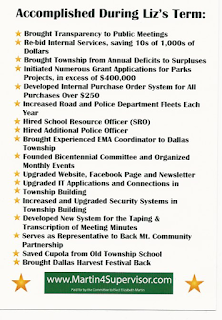 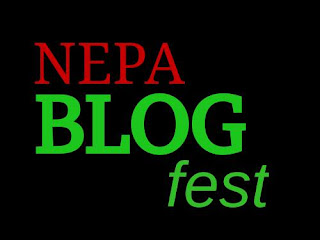 Since it's inception Blogfest has been described as the best non-political political event of the season. No speeches are allowed and the rule is to agree to disagree but don't be disagreeable. Many local and statewide candidates will be attending. All are welcome, and there is no charge for admission.

Since it's revival in the Spring after a short hiatus people have been asking us to do it again. Started as an informal political mixer it became a networking event for bloggers, voters and political candidates.

We are thrilled to announce that NEPA Blogcon will join us by having their after party with us!