The sad news is that's the only addition to the blog roll as many of our former bloggers have either quit or now put all their energy into Facebook. I can understand why. I deleted a bunch of sites because they haven't been updated in years.

John Cole Cartoons is one of the best in the business.

NCFE touches on politics and has observations on life, the universe, everything plus he is a fan of  Hunter Thompson. Give me ether.

2 Political Junkies keep  us up to date on Pittsburgh and national politics. They keep Jack Kelly honest.

Lehigh Valley Ramblings is one of the best local political blogs in the country. Bernie does a lot of original reporting that results in some very entertaining pissing contests.  No pot belly pigs were harmed writing this post.

The Lu Lac Political Letter is regarded as the gold standard of local NEPA political blogs. The Yonk has built it into something of a media empire with his appearances on TV and radio.


The reluctant Democratic Committeeman Another Monkey has been busy shooting the moon.

Keystone Politics is a progressive Philadelphia blogger that supports the Guv and bike riding.

The author of Susquehanna River Sentinel is a local product that now lives in the Philly area and is one the best sources of information about the River and the environment.

One of my first friends in this blogging thing was a guy from New York who helped me win some awards that don't seem to matter much now. Simply Left Behind  is the only site outside PA on the blogroll.

Above Average Jane is another one from the early days of hobby bloggers.

I still can't read Posts From The Fringe because of the background.


What happened to Jennie Monica?

Pittston Politics stopped posting over the summer but he has threatened to come back.  It looks like Joe has given up on the blogging thing in favor of posting right wing talking points on Facebook. Guns good, Rebel flag good and abortion bad.

The Keystone Report looks similar to Drudge but  it's must visit everyday because Chris gives us all the headlines and his hair looks mahvellous.

Then there is the Blogfather. My inspiration and mentor. Wilkes-Barre Online probably got rid of the worst Mayor in the the history of the city. After his mission was complete he seemed to loose  his focus and now blogs infrequently at Circumlocution.

A new job for the Benghazi committee

Since the Speaker to be  Kevin McCarthy confessed that the committee's best work has been hitting Hillary's poll numbers it's time for them to look at a real problem. The soft spoken grandmother from Sodom on the San Andreas has an idea. 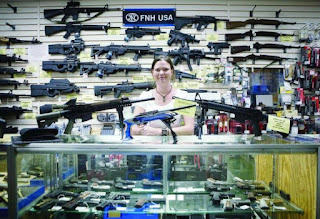 Washington, D.C. – Today, Democratic Leader Nancy Pelosi sent a letter to Speaker John Boehner calling for the creation of a Select Committee on Gun Violence to confront the crisis of gun violence in America and recommend common sense legislation to help end it.  In addition, Leader Pelosi urged Congressional passage of the bipartisan King-Thompson bill to strengthen background checks that save American lives.
As Leader Pelosi wrote, “The epidemic of gun violence in our country challenges the conscience of our nation.  Mass shootings and gun violence are inflicting daily tragedy on communities across America.  As of today, nearly 10,000 Americans have been killed by guns in 2015 – more than 30 gun violence deaths a day.  Yesterday’s terrible attack at Umpqua Community College in Oregon marked the 45th school shooting this year alone.

Everybody should have a gun, it makes us all safer 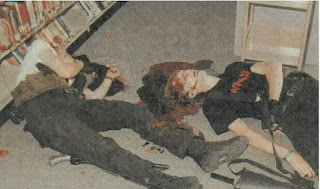 So many politicians try to make us afraid of some Muslim terrorist trying to kill us but the chance of that happening is very remote. A guy tries to set his sneakers on fire on a plane so we all have to take our shoes off for the next few years.

Today there was yet another mass murder in Oregon but nothing will be done about it because of a broad reading of the 2nd Amendment by the courts and the gun(NRA) nuts have a veto on almost all gun safety laws.

2nd Amendment: A well regulated Militia, being necessary to the security of a free State, the right of the people to keep and bear Arms, shall not be infringed.

What about the "well regulated militia" part.  The Supreme Court has ignored it and we have been arguing about it since 1791. The Militia  is important, so if you want to own a gun you should be ready to muster and fall in line to protect the country from invasion, rebellion or Indian attack.

Labels: guns
Posted by Gort at 7:15 PM No comments: