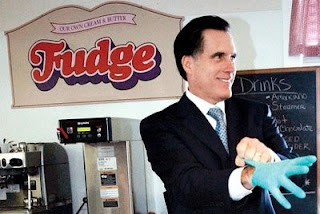 Romney's Cruel Canine Vacation
.
.
The reporter intended the anecdote that opened part four of the Boston Globe's profile of Mitt Romney to illustrate, as the story said, "emotion-free crisis management": Father deals with minor — but gross — incident during a 1983 family vacation, and saves the day. But the details of the event are more than unseemly — they may, in fact, be illegal.
The incident: dog excrement found on the roof and windows of the Romney station wagon. How it got there: Romney strapped a dog carrier — with the family dog Seamus, an Irish Setter, in it — to the roof of the family station wagon for a twelve hour drive from Boston to Ontario, which the family apparently completed, despite Seamus's rather visceral protest.
.
.
He put the dog on the roof of the car! What kind of an asshole does something like that? The dog was literally scared shitless.
.
.
This story immediately reminds you of the scene in Vacation when Chevy Chase drives away with the dog tied to the bumper and when I first read it I didn't believe it. I found it hard to believe that anyone would treat their dog like that and his family let him get away with it. When we go to the beach in about 2 weeks our guy will be in the back seat wearing his seat belt and a good chunk of the stuff we pack will be for his benefit.
.
.
A few days ago Josh Marshall thought that Rudy Giuliani bailing on the 9/11 commission to speak to groups about 9/11 for a nice fee was the kind of story that could end his campaign but it hasn't gained much traction. But this story could be the end of Romney if the MSM picks up on it. Republican or Democrat, abusing an animal pisses people off.
.
.
Of all the Republican candidates for President he has to be the worst. He puts down the state he was Governor of for just 4 years and has changed his position on just about every hot button social issue to pander to the religious right. Earning the label Republichameleon from Andrew Sullivan.
.
.
.
Thanks to Pandagon for the pic.
Posted by Gort at 1:56 AM

I knew just knew this guy was bad news, and never trusted him, look i hate most pets, espescailly cats and little dogs, (but ur dog looks like a real dog i could get along with.) I wpould just leave the animal to starve or fend for itse instead of torturing it. Or just never get a pet. But this just means Romeny can't be trusted, i bet he is now a vegetarian. before say 2005 he was an abortion loving gay marrying dog abuser but now he is pro life pro lfamily and pro animal.

I'm angrier than Paris Hilton at a celibacy convention over the way the Commie Liberals are trying to destroy the reputation of a fine man like Mitt Romney!!! All the wussy feminized four eyed geek liberals don't know the first thing about having an ol' trusty dog to begin with!! (Unless you count the prissy poodles that most of them own). Damn it!! If anything I think ol' Mitt is too easy on the pooch. My ol' bulldog Titus is one rough hombre and he didn't get that way because I treated him like a prissy poodle!! I remember one time at the Legion picnic I was walking around munching on one of Thelma Jean's champion chicken legs, and for just one moment I let my guard down and ol' Titus did what dogs do--he snatched the chicken leg from my hand. Before the bugger had the opportunity for one of his taste buds to even enjoy his catch I decked him one in the rear with my left foot. Bulldogs don't have wings, but let's just say ol' Titus went flying so fast that even TWA would be jealous!!! Dog's have it too easy today and they don't even know what loyalty to their master is all about; and that's all because the commies want nothing more than for us to raise prissy frightened canines who will just let the KGB into your front door without a single bite!! Damn it!!!!
So to all you prissy liberals out there, how about doing a few things for me: Get a cheap haircut (not one of the 400 buck jobs that sissy Edwards got); go to church; don't vote; and for God's sake, don't buy a dog---get a cat instead!!!! I hate you all!!!!!!

I'm just amazed he had a dog carrier big enough for an Irish Setter. How the hell do you get that on your roof?

In honor of Mr. Romney and Seamus, he was made into a characture of an Irish Setter with Romney's head. You can check it out at...
http://blog.politicallywild.com/index.php?blog=2&title=4_of_diamonds_mitt_romney_republican_dec&more=1&c=1&tb=1&pb=1