Chris Carney has to put up with forgeries and teabagers 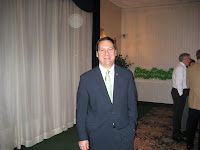 The American Coalition for Clean Coal Electricity hired the PR firm Bonner and Associates to help them oppose climate change legislation (ACES) who sent forged letters to Congressman Chris Carney and 2 other House members.
.
Carney voted against the bill.

Just like every other Congress critter, Carney's staff is available at times for people to ask for help with government programs such as Social Security, Black Lung or VA benefits. Most of the time 10 or 20 people will show up asking for help with a specific problem. This was not a town hall meeting with the Congressman but about 50 people showed up all hot and bothered about health care reform. His field rep, Ed Zygmunt, wasn't prepared to deal with it and fumbled badly. Ed's job is to solve problems with the bureaucracy not to deal with an angry mob.

Why these people want to be continued to be screwed by the health insurance companies is beyond me.


Congressman Chris Carney will hold a town hall meeting in Honesdale on August 17 from 11AM-12PM. The meeting will take place at the Community Room, Wayne County Chamber of Commerce, 32 Commercial Street, Honesdale, PA, 18431.

This should be fun.

Update: I just got off the phone with Congressman Carney and he had this to say...


Rude is not the right word for these people. Ed was just doing his job assisting people with private matters and they deprived their neighbors from getting help with their problems. They should remember that I'm one of the Blue Dogs that slowed the process down so we could have a discussion about this issue.

Seriously? Perhaps if you really don't understand why people are doing something, you should sit down and listen to them talk about what their motivations might be - you could learn something.

For instance, I understand why people would surrender liberty for security in a govt run healthplan. I don't agree, but I understand.

I'd rather fight with an insurance company I can leave than a government program I can't. It's called liberty. In 1776 a couple dead white guys pledged their lives, fortunes and sacred honors to get it.

I would hold some respect for the neo cons if they were just a little bit more honest and a little less hypocritical on the health care issue.
I call on all town hall protesters of retirement age to petition the Congress to delete their names from the MEDICARE program. After all, look at all the $$$ we could save. Perhaps we could divert their funds into helping those who want reform. We are actually doing these people a favor by freeing them of the chains of socialized medicine via Medicare. I won't hold my breath, however.

To Hell with government health care!!! In my day when you got sick you dealt with it on your own, not with some prissy beaureaucrat coming to your house with a stethescope and a suicide machine!!! I'm sure it will only be a matter of time until Obama pardons Jack Kevorkian and appoints him Surgeon General. Damn!!! I remember once when my old man got pneumonia; he didn't complain and he didn't have to count on the colliery to provide him with sissy sick pay. Men were "real" men back then and Pops went to work. He was sicker by the day, I can still hear him coughing all night long as if he was being strangled. Of course, we couldn't take him to the doctor because doctors were for those uppity class twirps who didn't know the enjoyment of working in a coal mine. They were the sissies who wasted their money on stupid medical care. Sadly, Pops died from his pnemonia, but at least we were able to use the money we saved by not taking him to a doctor to use for his funeral. Take that LIberals!!!
TO Hell with Socialized medicine. Just leave me alone; I don't want any government programs interfering with my Social Security check!!!!

Pope, let's phrase your question a little differently. If everybody (and I mean everybody)had to pay for Obama's new company Government Cross Health Insurance, would all those on the left still want it?

Gort!!! Say it ain't so! You missed the whole point of this story. Headline is: Chris Carney Refuses to Meet with Constituents. Bans the Press from meeting!
This is huge! You of all people should know the importance and the power of open meetings with constituents and allowing the press to be present. If these are nothing more than "angry mobs", like the dems want us to believe, let the "angry mob" in and broadcast it so we can all see. Carney needs to understand that when he refuses access, it only raises suspicions and causes more people to demand he do that which he is refusing to do. Thanks for the dates on his next townhalls. Somehow I am guessing that he won't have any trouble filling the room!

Gort, correct me if I am wrong, but I have been hearing through out this process no mention of a universal single payer system. I have heard some people in congress state they would like to see a government run option to compete with the private companies and it seams unsure at this time if that will pass in a Democratic controlled congress.

And everybody stating it will be expensive that may be true and yes taxes would have to be raised. But I don't understand the idea that I don't care if my premiums jump up 30, 40 or 50% a year. I don't mind loosing money to higher premiums but don't you dare raise my taxes.

And one last thought, I can understand why some people would not want to deal with a government agency involved with their health care, so they can keep the plan that they are with. That way the people that like their coverage will not have to deal with the government. Instead they can continue to deal with private insurance accountants determining if the proceedure their doctor wants to do will be paid for by them. Example Mr. Smith is told by his doctor you need a liver transplant, but I told your insurance company what I wanted to do but they said they wont pay for it. Mr. Smith say's no problem I'll just find a new job with a differnt insurance company that will pay for it. Mr. Smith finds his new job but his employer tells him he can't join the health plan because they won't except him because he has a pre-existing condition. At least I didn't have to put up with a government run agency Mr. Smith thinks.

you said the Headline is: Chris Carney Refuses to Meet with Constituents. Bans the Press from meeting!

How can Carney refuse to meet with folks if he is not even there? You are missing the point, the staffer who was at the meeting deals with constituent service issues as Gort mentioned. And if you want to see what the angry mob looks like just watch the video. These people are not interested in discussing Health Care with the Congressman. If they were they would have understood that speaking to a staffer is not the same as speaking to the Congressman. They will have the opportunity to voice their opinion directly with Carney. Instead they showed that they are cowards and only interested in starting trouble. Maybe these lazy as*h*les should get a job instead of picking on a guy who is just trying to help people with problems. The biggest coward there was Commissioner Rich Caridi. What a piece of junk he is. He should be embarrassed at his pathetic behavior and I hope the people in Pike County Vote his sorry butt out of office.

As a former member of the Pike Co. media, I know one thing for sure: You never turn off your camera, despite what anyone says. It's never worth the risk of missing the story.

Kudos to the photographer who got this footage, know we have more proof that the libs don't want debate on this or any other issue, they just want to jam more government down our throats.

But what disturbs me more is how libs and their supporters are trying to squelch our legitmate concerns by branding as an "Angry mob paid for by Fox News and the Drug Companies" When you had legitimate concerns about the war and the economy, we didn't refuse your right to speak, why are you trying to do the same to us?

Carney better watch himself, if he doesn't start listening to his voting public (you know, the people he's supposed to represent) he's going to lose his seat next year, just like the rest of the liberal congress.

These jackoffs were probably upset that they came to the wrong meeting, but decided to disrupt it anyway.


Hopefully the backlash against this organized attempt to thwart health care reform and deny citizens the ability to participate in meaningful dialogue will make the will of the real constituents loud and clear.


Where's a cop with a Taser when you need one?

organize a protest against your country when it is at war, you are a patriot.

organize a protest against something you feel is at best a socialistic program, at worse a communistic program, that goes against self reliance, self determination and all that bull shit stuff in the constitution and you are vilified.

the american experiment is over, freedom lost!

Why do conservatives waste their time on this wishy-wasy gort nut and his libtard friends?

you know, i'd have some sympathy for mr. carney, except for the fact that after progressives helped him get elected, he turned around and told us that he never really supported our priorities. He promised to help end DADT and then didn't. He told us he'd help end the war and kept voting to extend it.

so now Carney's gettign harrassed by republicans? Ooooh, pooor baby. poor fat pasty liar. "carney" is a good name for him: he's about as honest as a sideshow barker.

If he loses to a republican in 2010, i could not care less. and it wouldn't make a lick of difference, since carney votes like a republican anyway.

Anonymous 4:29 AM, don't you "conservatives" have something better to do? Like shouting down anyone who tries to express an opinion other than yours and shutting down any meaningful discussion?

Poor Carney! He's spent so much time since 2006 catering to narrow-minded bigots and wingnuts that it must be horrifying to him to see them turn on him. Carney was one of only a dozen Democrats who crossed the aisle and voted with the Republicans against the Hate Crimes Bill be had told voters he would vote for if they elected him. Perhaps he thought that would inoculate him against criticism from the lunatics on the far right. Looks like that-- along with one of the worst voting records of any Democrat in the House-- is no protection at all against dim witted Limbaugh and Beck fans who don't know a Blue Dog from a Marxist. Carney is reaping what he's sown and he deserves no sympathy. Progressives shouldn't have this shithead's back.