Ned Evans shows how not to respond to a controversy 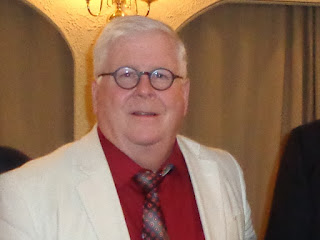 Wilkes-Barre Area School Board member Ned Evans posted something stupid and tasteless a few days ago on Facebook that has created a firestorm.


Outrage began growing after the Wilkes-Barre Area Save Our Schools page posted a screen shot Monday of board member Ned Evans’ comment about an article on a 27-year-old Arizona teacher who was charged in March with having a sexual relationship with a 13-year-old student.
The article that was shared features a crude headline referring to the teacher performing oral sex on the boy.
“Probably broke her teeth on it. Lol,” Evans wrote.


He initially apologized on his Facebook page "I wasn’t trying to convey anything. It was a stupid, idiotic, insincere comment that I made, and I apologize for it. I have no excuses. I apologize for it."
If he left it at that he might have been able to get through this after the outrage calmed downed. But then he added “It just was a stupid back-room-with-the-boys comment and I should never have made it. That only inflamed the situation, he's not Trump. His Facebook page has since been scrubbed or may have been deleted. The first rule of being in a hole is to stop digging.

I called him out on it and he responded by calling me a loser for being defeated in the election last year. Then the Superintendent and the rest of the board called for his resignation. He attacked some members of the W-B SOS group for his troubles. City council member Beth Gilbert pointed out  the continuous misogynistic comments by this man and he responded by attacking her. 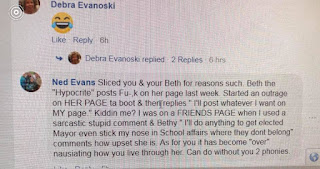 Now he is threatening to sue people for his troubles.

Despite personal pleas from colleagues for him to resign, Wilkes-Barre Area School Board member Ned Evans on Thursday insisted he’s staying in office.


In fact, Evans said he’ll soon be going on the offensive.


Amid the controversy over a crude comment he made online about a student sex case, he claims he has been defamed by certain people and plans to file a lawsuit.


“I cleary plan to sue,” Evans said, noting he has retained a lawyer.
He declined to name the possible targets of his litigation


This is so sad to see someone I know and like go so far off the rails.