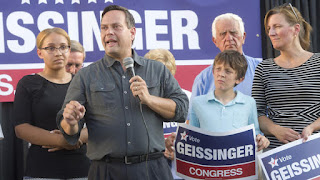 Northampton County Councilman Glenn Geissinger launched his congressional campaign Tuesday for the PA-17th CD against  U.S. Rep. Matthew Cartwright. He is the first Republican to announce and we can expect more.

His announcement via the Morning Call: "I want Matt Cartwright to understand that solutions come out of the private sector. They come out of people like you and me going to work every day to make America a better place. They don't come out of adding more regulations. They don't come by scaling back on our ability to produce jobs,"....I am going to do what it takes to win in order to bring what these people think government should be to Washington,"....

Sounds good until this;

The people of northeast Pennsylvania need someone in the nation's capital who would go up against the U.S. Environmental Protection Agency and protect blue-collar jobs and the coal industry that dominates the northern part of the district.

The coal industry in PA is just about dead in Pennsylvania and employs less than 9000 people statewide. It seems that it is a tenet of faith for Republicans that the EPA is some sort of  evil organization that people hate. The last time I checked people like clean air and water.

He also took a shot at the Democratic House Leader  Geissinger painted himself as a better fit for the district than Cartwright, whom he labeled a "Nancy Pelosi Democrat."

This is so 2008. Trying to tie a local candidate to the soft spoken grandmother from Sodom on the San Andreas hasn't worked beyond the people who would never vote for a Democrat anyway.

I would argue that Pelosi was a more effective Speaker than John Boehner  who can't even keep the government working because he can't  deal with a bunch of anti-government anarchists.