What if Trump wins the GOP nomination? 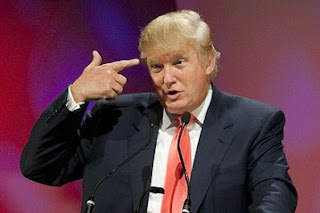 
I've been watching Presidential politics a very long time and I have never seen anything like this. The more outrageous things he says that would sink the usual presidential bid makes him even more popular.If he is caught out saying something dumb or lacking knowledge he just insults his opponents or the inquisitor. They are losers and stupid.


He is top of the polls nationally and leading in 3 of the early voting states. Whether he can build a turnout operation remains to be seen but that may not even matter if the people he is connecting with show up on their own. Many people I talk to both Democrat and Republican tell me 2 things they like about him. Kicking out illegal immigrants and the system has been been corrupted by money and since he is rich he can't be bought.

He may win a few of the early primary and caucus states but the SEC Primary happens on March 1st. Trump may have the momentum to win some of them but not all . This is also Hillary's firewall. My prediction is that he will many of the southern states and clear the field. Then what?

At that point he will have to start kissing the ass of the big donors since he probably doesn't have $1 Billion to finance a general election campaign on his own. Then the much vaulted "Republican Establishment" will have a choice to make.

Much has been made about the loyalty oath that the Donald signed pledging to back the Republican nominee. But if the Trump is the nominee I can see a 3rd party/independent bid by an establishment Republican. It may be one of the candidates running now because the loyalty oath isn't worth the paper it's written on or it could be someone waiting in the wings like Paul Ryan or Mitt Romney

Polls this early mean nothing. In 08 it would have been Ruddy and Hilary.... He will fade once the votes start getting cast.
And if by some fluke he starts winning, then so what? He might actually shake things up, because these days Presidents matter so little... O'bama and Bush presidencies have much more in common once we delve behind the rhetoric.

As noted by a fellow GOP candidate back in 2013, the GOP needs to "...stop being the stupid party...". Trump's mission seems to be make sure "stupid" stays firmly entrenched in the GOP lexicon.

For example, do these folks who support Trump REALLY want to live in a country where you have federals hunting down 11 million illegals? Hell, in that scenario, how many times will Lou Barletta (and other sufficiently ethnic looking folks) be asked to produce "papers"? It's yet another example of a 1000% angry emotional appeal, common sense be damned, from a man who probably only laughs when he makes fun of older women. I don't even like Carly Fiorina and I was repulsed when I heard Trump mocking how she looks.

My guess is that at some point these same angry supporters will be done with Trump. Anger seldom has a long shelf life. Like kids on Christmas morning, they will eventually tire of playing with the same Trump toy, and they'll find another. By then though, the damage will be done. Trump is a walking misogyny machine...couple that with his cheesing off 98% of thinking Hispanics (the remaining 2% includes Rafael Cruz and Marco Rubio...and perhaps a few that work construction for Trump) and you have the makings of a GOP disaster. The "high information" GOP folks (i.e. George Will, Charles Krauthammer and others) have already figured that one out...hence the almost daily stream of Trump attacks.

The truly sad part? Hillary Clinton could very well be damaged goods in 2016 and Bernie Sanders is simply too far left to win a general election. The GOP should have a decent shot at this election, but Trump seems to be doing his best to make sure that never happens.

Way too early. 25 percent of the GOP supports him, leaving the remaining 75 divided amongst the 200 remaining candidates for the nomination.
One of the easiest ways to attain who will get the nod is pure calculation:
Current second place GOP'er: Carson---not a chance in hell. Third: Fiorina--not a chance in hell. Fourth--Cruz, see above.
When it all comes down to it one of these four will be the nominee: Jeb, Rubio, Walker or Kasich, with Rubio and Kasich (proper spelling?) more likely. I don't see the GOP nominating another person named Bush.
OF course, I could be wrong.
Bless YOU>

Trump won't win a single primary. His entire campaign depends on media popularity and voter cynicism and ignorance. 70% of the Republican Party aren't buying this "brand". I still think it'll be Bush (although I'm not as convinced of that as I was three weeks ago).

The biggest winner of Trump's success so far is Hillary -- if it weren't for Trump, Sanders' performance would be all the talk, and that talk would already be influencing the polls in the March 1 states. But because the feckless media is so focused on Trump, Sanders isn't getting he visibility and viability punch he deserves.

@Much Maligned . . . maybe you're maligned because you make comments like that. Saying that Presidents Obama and Bush are the same has got to be the most delusional political observation since the Nader trolls went home.

Finally a candidate who can do and say whatever the hell he wants and has the money to back it up. Nobody will buy him. Too bad he is literally a maniac!