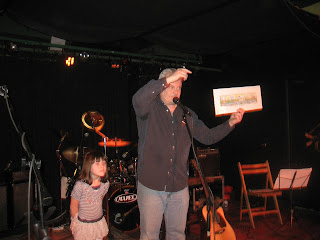 Scott Cannon put together a great event at the River Street Jazz Cafe in Plains that attracted about 100 people. There was an auction of artwork and a raffle of of baskets and one of them was won by Mrs. G. She is thrilled. We will be listening to the Beatles for the next week.

A few candidates for the upcoming election showed up. Michele Bednar is running for Controller and was circulating petitions. Steve Urban is also  is running but that is a big secret. Eileen Sorokas is running for Luzerne County Council and told me that she has already filed. Independent Rick Williams was a bit iffy but it sounds like he running again.

It was great to meet and dance with Dallas Twp. sup Liz Martin and Harvey's Lake Miche'lle Boice.

W-B Area School Board will have plenty of candidates but Luzerne County Council will not.

Christine Katsock is running for reelection but Lynn Evans is not. Genaway  and a couple Thomas and Evans are in. Cafferfy from Plains is a candidate.

We will see Wednesday.

This sweet little girl in the picture picked my name and I won a Beatles Gift Basket. I am so EXCITED! I never win anything. And it was a great event for a great cause. Let's STOP THE FRACKING!

the much maligned anonymous poster said...

I always find the arguments on both sides of the fracking issue interesting, and I am always trying to learn as much factual informaiton, and try to distinguish it from propoganda. Well, then I came across the below article.

It seems that the hero "Dick From Dallas" so worhsiped, Mr. Anti-Fracking himself, former radio host, Kevin Lynn, as done a 180.

Now according to Mr. Lynn, after doing research he discovedred that fracking is safe. Hmmm kind of funny how all the Lynn Lovers would claim he did his research when he was an on air talk show host, but on this matter he didn't seem to do it while he was on the radio condeming the industry that now pays his salary.

So, was Kevin Lynn intellectually lazy during his WILK days? Probably

Is he a hypocrite? Probably.