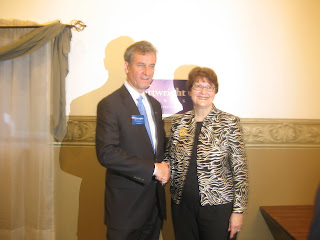 Bob Caruso counted a crowd of at least 106 people that turned out for the rally hosted by 120th District State Representative Phyllis Mundy for 17th CD candidate Matt Cartwright tonight in West Wyoming. The turnout probably would have been even better if Luzerne County Democratic Chair and W-B Controller Kathy Kane didn't decide to skip the Wilkes-Barre city council meeting instead scheduling a meeting at the Ramada on Public Square that stepped on this event. After all the Luzerne County Democratic Committee made a not so unanimous endorsement in this race. Some people think that the endorsement hurts more than helps. 11th CD Democratic hopefuls Bill Visko and Gene Stilp were also facing off at the same time at the LWV forum in Kingston. Thom Shibula told me that Stilp had the "bigger pig" inflated outside Wyoming Sem. I'm surprise that the LWV would allow that considering all their other stuck up rules. So many things to do on a Thursday, need a towel.

I'm paraphrasing the speeches but certainly would not take them out of context.

Phyllis Mundy kicked off the night saying she doesn't understand why people would equate both political parties. There are differences between the party's " I see it everyday in Harrisburg. " Mundy also cited President Obama. She then gave a rousing intro to Matt Cartwright.

Matt then acknowledged what we all know "Phyllis is a giant in the Democratic Party." He then generously introduced Mornoe County State Rep Democratic candidate in the 176th HD Maureen Madden.The one thing that they all agreed on was that they were thankful that Lou Barletta wasn't representing them in Congress anymore.

Cartwright then delivered one of the best arguments I have ever heard from a local or national Democratic politician. " We are the Democrats, people are counting on us." "I will stand for Democratic principles but my opponent won't."He then reminded the audience of the successes of the Democrats, the SEC was created when FDR was President so was Social Security then along came Medicare. Business is good but you have to have some rules.

He doesn't like Tim Holden's TV ads saying "attacking me and my family as if we are the scum of the earth." He wants to hear this in person from Tim Holden who will not debate him. Holden won't debate Cartwright because he can't defend his votes against the ACA and for the Haliburton loophole.

FYI
The meeting of the Luzerne County Democratic Committee was scheduled before Phyllis planned her get together for Matt.