We arrived at Gas Stock about 2:30PM and missed the few politicians that showed up and the triumphant arrival of the hearty souls who walked from Nesbitt Park all the way to the Luzerne County Fairgrounds.

State Reps Phyllis Mundy and Eddie Day Pashinski worked the crowd along with 120th District Libertarian candidate Tim Mullen. I understand why none of the local Republican hopefuls showed up but the absence of other Democratic candidates and officeholders was disappointing. I did catch Jay Sweeney the Green Party PA-111th District candidate's speech.

Anyway, there were a few dozen vendors with continuous music on the band stand and a pavilion were people had the chance to sound off. There was several hundred people milling about when I got there and a few thousand wandered in and out throughout the day. Not a bad turn out for a one time event on the same day as the Tomato Festival.


Some Bloggers and others walked the 10 miles from Nesbitt Park starting at sunrise. I passed on that opportunity. Kudos to Don, Herb and Mark and those who went along for the walk. Dr. Scholl's can use you people in a commercial.

Gene Stilp was there wearing a straw hat and he bought along a few of his inflatable toys.

I ran into Michelle Boice who has been very active in opposing drilling anywhere near Harvey's Lake and Lou Jasikoff flying the Libertarian Party banner and many other old and new friends.

Both local newspapers sent reporters and photographers and the TV stations showed up as we were leaving.

Here are the links from the local media:

Singing the blues about shale at Gas Stock concert

There were many petitions to sign opposing various aspects of this slow motion rape of our environment but the cynic in me knows that the signatures of 10,000 citizens carries less weight than the one signature on a campaign contribution check. 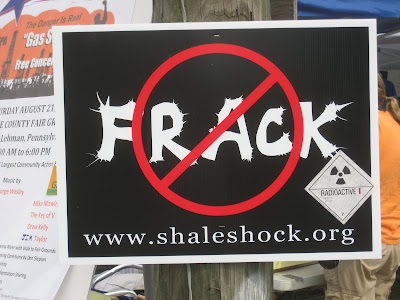 I think the low turn out says a lot. Those that are interested, read blogs or listened to talk radio are a minority in all of this. People just don't care. Just because a few people scream loud doesn't make them correct nor the majority.
Even those that have been interested in the past have taken less interest in most topics.
Mark Cour sometimes goes weeks between postings. Gort may go days without a post and then post a paragraph and Yonki's blog has been more cut and paste features than really any of his thoughts and insights. Over time people just get busy with life and lose interest in things they really have no control.
There are very few comments on blogs anymore. Except for Big Dan who can't seem to put a coherent thought down and posts 15 responses, there are rarely more than a few comments.
As far as talk radio. They may have a few thousand listeners and they have the same callers from day to day, sometimes from show to show.

I have always tried to instruct my students as to the real world. One of the prime responsibilities of a teacher is to avoid mendacity at all costs. So students, let me get to the point; the webmaster stated surprise that very few politicians attended the GasStock assembly. Why??? The answer is simple, politicians view the big picture and the big picture concerning drilling is that the majority of the voters are in favor of it. Therefore, it would be pure political suicide to attend an event opposed to drilling. To put it in simpler terms for the less educated reader, would you expect to see a politician attend a festival that was in favor of raising taxes??? Of course not.
I understand that the left needs to create a great and colassel boogey man in the face of the "drillers", but this is just not so. All children, of course, need to have a boogeyman and it can be quite amusing to us adults as we view their pointless fears. My point, class, is that there is no boogeyman in the face of progress, only progress itself. Certainly most of those (including the blogmaster) who attended this gathering of Saturday past, did so for sheer enjoyment of a hot dog and a glass of cheap beer, as opposed to actually looking at the real truth where drilling is concerned. Had anyone attending done so, they would have stayed home. Of course, they may also have attended better still. All youngsters need to go out and play whilst the adults do the "real" work. Class dismissed!!!

Re: Big E:
The stories of contaminated water are legion and mostly inaccurate. In those rare cases where someones well water had some slight contamination, Marcellus Shale conveniently provided water buffalos in plentiful numbers, mind you, at no cost to the homeowner, even when there was NO reliable proof that MS was responsible. In fact, the few times slight contamination has occured it had been cleaned up promptly.
I find that whenever any youngster attempts to debate my points on this blog that they resort to childful name calling. It truly would enhance your position and more importantly your credibility, youngsters, if you would make a slight attempt at practicing some class. And instead of invoking silly four letter words, let me fill you in on very important four letter word which you should utilize when you go out into the public: S O A P.
Class dismissed!

My Dear Professor: For those of us who know which end is up regarding recent and ongoing MS events in Bradford and Susquehanna counties, your comments are really laughable. You are just making this stuff up as you go along. If the contamination has been cleaned up promptly, why are these folks still having water delivered to their homes? Let me guess. Good will? All I'd really like to know is which gas company you work for or have stock in?

Have fun impressing yourself with your continued delusional rants.

Hey ya gotta break a few eggs to make an omelet.

Not so fast, Professor. Don't dismiss class just yet. You directed us to do our research and promised me a chance to present my findings to the class. When I was but a little child, my parents assured me there was no boogey man. They also taught me to take the time to learn what was real and what was not, and to be independent and use my own mind; to be a leader and not a follower. They told me that knowledge was power and I think it was to protect me from folks like you. So, I studied the results to date on the safety record here in our state. It is a fact and public record that the gas industry has racked up nearly 1,500 violations in the last two and a half years in Pennsylvania. (DEP Records). Nearly 1,000 of them have had an environmental impact, or WILL have an environmental impact. You see, some of the spills will take time to reach the water supplies, so we just don't yet know the full environmental impact. I also spoke with the people in Dimock, PA who are living with those water buffaloes in their yards, having their water delivered to them daily. Would you want to live this way, having to go outside to draw your water from a plastic container? I have no idea what they do in the winter when freezing temperatures arrive? They've been living this way for 2 years now. The gas company tried drilling new wells in Dimock, but the aquifer is contaminated; therefore the new wells were no good either. The people have had to hire a lawyer and sue because DEP thinks the water buffaloes are the solution and that people should accept this new way of life. Some have to have a system in their home to remove the high levels of methane gas so the home won't blow up. I don't want to live this way and don't think anyone should be forced into it. Trouble is, there is no escape. The people can't sell their homes so they can move out. Do you want to buy one of these homes? Oh, and there was just another incident in another county, Bradford, a week ago that contaminated wells with methane gas. The lid blew right off the one man's well, and other nearby wells were found with high levels of methane gas. Water buffaloes will become our way of life. Will the gas industry supply the trucked in water forever? I doubt it. When they are all done taking the gas and destroying our water and air, they will leave and we can begin to pay per gallon to have water brought to our homes and become accustomed to going outside to draw water when we need it. I think it will be costly, because it will have to be brought to our state from somewhere far away when all of our fresh water has been poisoned by the gas industry via this horrible, filthy process called hydraulic fracturing. Oh, I have much more research, Professor, much more. Perhaps I can come to class daily and speak of the many, many other issues, based on the facts I learned in my research. I have no time to go out and play, Professor. I was taught to share the knowledge that I acquire through my work, and not to be afraid to speak out on a subject, no matter how many "boogey men" tried to scare me away. I was taught that truth always prevails in the end. I can only pray that in this case, truth prevails before the gas industry has destroyed my beautiful state and every last drop of water in it. Michell'e Boice