Reading the press reports today it has become clear that not only is Tom Marino a liar but his superiors in the Department of Justice thought he was incompetent.

D. Kyle Sampson, the chief of staff to then-Attorney General Alberto Gonzales, subsequently placed Marino's name on a list of U.S. Attorneys he said the department, "should consider pushing out," based on "problems" he learned about in summer 2006, according to the report.

You can read the report at this link.


A report timeline shows that Marino was recommended for termination weeks after he provided a personal reference on a gambling license application for a convicted felon who was under investigation by Marino’s office.

Marino and one other attorney were removed from the list “not because anyone disagreed with the removal recommendation...because both were believed to have the political support of their home-state Senators and the judgment was made not to risk a fight with the Senators over the proposed removals,” according to the report.


This seems to be different than the dismissal of other US Attorney's at the time who were booted for political reasons by Attorney General Alberto Gonzalez and Karl Rove. Why Karl Rove was making personnel decisions at DOJ is a subject that has been covered by many other bloggers at the time. Instead of getting rid of him because he wouldn't toe the party line like they did to the others they just thought he was a putz.

Tom Marino continues to be Chris Carney's biggest asset in this election and the Carney camp let him have it in a press release:


CLARKS SUMMIT -- This morning, news broke in the Wilkes-Barre Citizens Voice and the Scranton Times-Tribune about a Department of Justice report that provides searing evidence that Tom Marino was unfit to serve as U.S. attorney and was recommended for firing before his abrupt 2007 resignation. The report shows that Marino was singled out for firing just weeks after he had provided a personal reference for a convicted felon who was under investigation by Marino's office.

The following is a statement in response to the news from Josh Drobnyk, campaign spokesman for Congressman Chris Carney (Pa-10):


"The facts speak for themselves. The report from the Justice Department makes it clear that Tom Marino lacks the essential qualities that people on all sides of the political spectrum deserve in an elected official: leadership, integrity and competence. This Department of Justice report states in no uncertain terms that Marino failed to lead his office. He has lied about the controversial reference he provided for a convicted felon who was under investigation by his office. And it is now clear that he lied about his record at as U.S. attorney. The question that he must answer is what else is Tom Marino hiding? It is time for him to truthfully account for his record and stop deliberately misleading the public."


Marino's mouthpiece did his best to minimize the damage.


A spokesman for Marino's Congressional campaign, Jason Fitzgerald, dismissed the revelations in the Justice Department report as another distraction in a race that has centered more on missteps and personal defects than social issues and policy positions.

"We're really not going to play in the mud on this stuff," Fitzgerald said Wednesday. "Those claims are totally without merit. Tom Marino was a distinguished prosecutor."

He also added that Nancy Pelosi is a liberal.

After talking with Chris Hackett and Dan Meuser last Friday I keep thinking what if those guys had held off running until this year.

2002: Tom Marino is sworn in as U.S. Attorney for Middle District of Pennsylvania, which includes Wilkes-Barre, Scranton and Harrisburg.

December 2005: Marino serves as a personal reference for DeNaples' application for a license to operate the Mount Airy Casino in Monroe County.

January 2006: A Justice Department official includes Marino on a list of "problem" prosecutors and tells a colleague she is "not sure about" him.

September 13, 2006: D. Kyle Sampson, the chief of staff to then-Attorney General Alberto Gonzales, places Marino's name on a list of U.S. Attorneys the department "should consider pushing out."

January 2007: Marino discloses relationship with DeNaples to the Justice Department and is ordered to withdraw from the investigation into DeNaples.

January 2008: Marino starts working for DeNaples, earning $249,999-per-year as the full-time counsel for his non-casino interests. 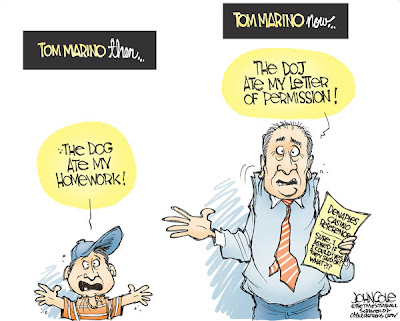 It's surprising that the RNCC plowed almost $600k into this race.

Marino is ahead big in some suspect polls, but Democrat Carney has gone nuclear in attacking Denaples, who has given a lot of money to state Democrats and who has also received a casino license from Harrisburg.

Carney and the RNCC seem to see the race the same way, but does anyone else?

More garbage spewed on a fine man's reputation courtesy of the Obama Justice Dept.
For once I agree with the Commie blogger, though; as much as I admire Mr.Marino, I would have preferred to see the young Mr. Meuser in this race.

Seems the Yonk called this earlier in the week