Yes, Congressman Kanjorski said something today that could have been diffused if he just said "not only."

Such nonsense. Kanjo has always been a champion of civil rights doing things that wasn't popular at the time.


Photo From the Attic: Community Organizer 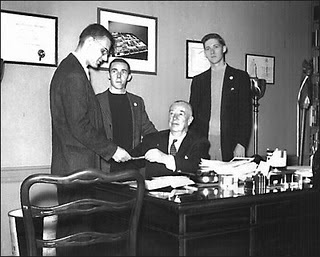 Now-Rep. Paul Kanjorski (D-Pa.) was a Temple University college student in 1958. Here, Kanjorski (left) receives from Temple President Robert Johnson one of the first donations for a fund to help rebuild Clinton (Tenn.) High School, which had been bombed and destroyed by a group opposing desegregation. John MacDonald (left) and David Dorsett stand behind Johnson.
.
I spotted this photo in Roll Call and asked Congressman Kanjorski's press secretary Abigail McDonough for some background on it besides what the caption says.
.
Clinton High School in Clinton, Tennessee was one of the first schools desegregated under court order. On October 5, 1958, the school was bombed by a group opposing integration and the entire building was decimated. During this event, Congressman Kanjorski was a student at Temple University in Pennsylvania. He took the event to heart and wanted to do something to help. He formed the organization Reestablish Education at Clinton High School (REACH) to help raise money at a national collegiate level to rebuild the school, and to show that force and violence are not the means to reach an end. Rather, REACH helped show what can happen when people work together.
.
As chairman of REACH, Congressman Kanjorski helped raise money at Temple and throughout other college communities by reaching out to students,professors, and administrators at colleges and universities throughout the country. He convinced then Temple University president and one of the founders of Time Inc., Dr. Robert L. Johnson to make one of the first donations to the organization. Johnson; another former Temple president, Harold E. Stassen; Eleanor Roosevelt; former Senator Joseph Clark; and then principal of Clinton High School, W.D. Human, all served as sponsors of REACH. Congressman Kanjorski and REACH helped raise some of the money to rebuild Clinton High School.
Posted by Gort at 9:48 PM

I don't work for any politician.

I do get info from Kanjo's office and campaign staff. Lou Barletta's ace press guy also keeps me updated.

It would be great if somebody would pay me for blogging. I could use the money!

Hard to believe the assholes who give Gort shots and do so without batting an eye. If anyone can do better, perhaps starting a blog of their own would be a good idea. If you don't have the energy to get off your dead ass and do something, then simply shut the fug up! I really hate complainers who do nothing on their own but complain and criticize what others do. Get a life!

Can't offer cash. How 'bout a pitcher of cold brewski?

I want to know from ALL Republicans, including Lou Barletta, why they have a problem with the $30 billion dollar bill to extend unemployment...but they have no problem spending $30 billion EVERY TWELVE WEEKS on the Iraq & Afghanistan "wars" for longer than WWII???

They shouldn't be allowed to ignore or not answer this question, and they should ALL be asked this question by all media and bloggers.

You're not serious, if you say you're for cutting the deficit...but won't cut the biggest spending of all, more than all others combined: the war spending.

And I fault media and bloggers who don't ask them this question.

Of course, they will IGNORE this subject on their own accord. They'd be INSANE to bring it up...when they say they're for "cutting spending".

And let's include DEMOCRATS, too, with this question. It's not "OK" if you're a Democrat, and "your guys" do it. We all have to start holding our own parties accountable. And we all have to start asking these questions, because the "professionals" obviously aren't!!!!! They let on candidates and give them an unchallenged free forum to say whatever they want. They're STENOGRAPHERS...not INTERVIEWERS.

The radio characters sit on the phone and giggle with the candidates, as they say whatever they want, unchallenged. Giving us the information we need from them, where they stand on important issues.

One of these days, I'm going to tape an "interview" of one of these jerks "webster", Corbett, and Sue Henry...and take it apart sentence by sentence, and show what shills they are, never asking tough questions or letting them give non-answers. Too bad they don't have archives of their shows. Do they???

Wow get a life relax dude its just a blog. U sound real classy cursing. People state their opinions especially on blogs and the person who commented stated his opinion thats all. If you can't take the heat of politics don't get involved. It is good to read peoples comments especially all those who don't feel the same. Poster 312 don't not post on here because their is one commenter here who doesnt like what you have to say.

It's simply a matter of the loose lips being faster than the aging brain. No biggie.

Then again, with that said, our gracious host would not be so bent-over apologetic if a member of that dastardly and evil, that no-good, scumbag-laced opposing political party--well beyond his years--went and said exactly the same words.

It's sad to say, but what we have here is a once-upon-a-time well-meaning poliblogger gone whole-hog party apparatchick.

(D) Paul Kanjo can do no wrong, even when he goes "fumblemouth" for the umpteenth time?

Dubya must be scratching his head right about now.

Hey Gort, You have to go all the way back to 1958 to demonstrate Kanjo's civil rights credentials? What college student isn't a liberal? Kanjo has lost touch with his constituents, don't you think? Is it okay with you that he refuses to hold any public town hall meetings?

ANother copy and paste story. No real insight, no real fact check, except when the ages old and debatable Google story props up the party line.

Paul Kanjorski---the protector of the oppressed, the poor, the minorities and the "defective."

Cut me a break, will you Gort?