Patrick Murphy nominated by the President 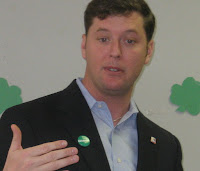 This email from the White House popped into my inbox:


Patrick J. Murphy, Nominee for Under Secretary of the Army, Department of Defense
Patrick J. Murphy is a Partner at the law firm of Fox Rothschild LLP in Philadelphia, Pennsylvania and a Senior Fellow at the Center for American Progress.  He has also served on the Board of Visitors to the United States Military Academy since 2011.  As the first Iraq War veteran elected to the U.S. Congress, Mr. Murphy represented the 8th District of Pennsylvania in the United States House of Representatives from 2007 to 2011.  He served on the House Armed Services Committee, the House Permanent Select Committee on Intelligence, and the House Appropriations Committee.  From 2003 to 2004, he was deployed to Iraq as a paratrooper with the U.S. Army’s 82nd Airborne Division, where he earned the Bronze Star for Service.  In 2001, Mr. Murphy volunteered for overseas deployment and was deployed to Bosnia in 2002.  Prior to that, he served as a commissioned officer in the Army Reserve from 1996 to 2000.  Mr. Murphy received a B.A. from King’s College and a J.D. from Widener University School of Law.

I have to admit that I'm partial to fellow vet Murphy a graduate of King's College who had the honor of introducing President Clinton when he visited Wilkes-Barre in 1996. The first time I met him he told me "I read your blog." He attended the fall 2011 Blogfest driving through a monsoon to get there. He has been hosting a Sunday show on MSNBC "Taking the Hill" that  focused on military service, progressive politics, and national service.

I thought he was the better candidate in the 2012 Attorney General race than  Kathleen Kane. Headlines like this prove me right.