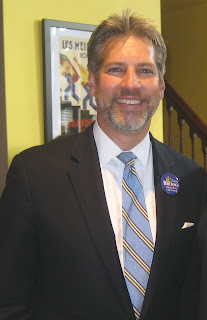 Tony Brooks had a great turnout for his campaign kickoff for the  W-B District B council seat at Le Manhattan Bistro on South Main St. last night.  He reports that the event pulled in almost $3700 which is some serious coin for a city council race. It was also the first event I ever went to were the waitstaff was circulating escargot with the other hors-d'oeuvres

This guy has created more excitement in a local race than I have seen in years but he has big hill to climb to overcome the Democratic registration advantage,but he can do it. In the primary
more Dems voted than Republicans 807 to 167 but in the last General Election in 2011 only 1254 people bothered to vote. If he can identify his voters and increase turnout he wins.

And why not? Like me he was born in the old Wyoming Valley Hospital on Dana St. and left for a few years but came back to place he was born and loves. Tony is a historian known for leading tours of Wilkes-Barre's treasures.

In his address to the crowd he threw out some ideas like residents are the key to the downtown. You need a 5-10 year plan to revitalize Wilkes- Barre not just wing it. We need more neighborhood associations and even look at making downtown into a retirement village where people can actually walk to things to meet their needs. We need walkable neighborhoods like Rick Williams recently proposed on county council  He made a strong point by saying don't move, Improve.   Like me he thinks the KOZ program has been a failure. He also addressed the Sherman Hills problem by pointing out that people won't go downtown because of all the problems but they still go to Wegman's which is closer to the notorious apartment complex. Being a Republican he ruled out a tax increase calling for expanding the tax base. Tony pointed out that many places don't have partisan elections for local offices and he not in this to trade votes for jobs. He then did a Q&A with the crowd and one person reminded us that there a lot of good people living in Sherman Hills.

He delighted in  pointing that the crowd not only included  Republicans but Democrats, Greens and even a Socialist from the soviet of Washington State and claimed that his primary opponents in both parties had endorsed him. 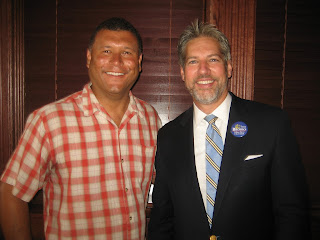 I teased Shawn Walker of the WB Area School Board that the headline of this post would be Walker Endorses Brooks. He was fine with that saying he couldn't get any more popular with the other board members. 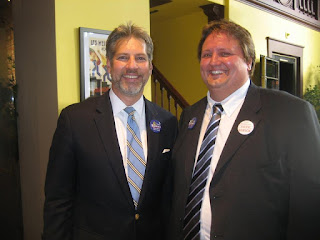 I also had a nice chat with Republican Mayor candidate  Frank Sorick who told me he hates asking people for money for a political campaign because people are taxed enough.

In local elections in the last 20 years I have voted for more Republicans than Democrats because there is no party way to plow the streets or pick up the trash. What matters is competence and integrity .Tony Brooks has both.

No post on local politics would not be complete without these 2 characters. Anchor baby on the left the fashion challenged  guy on the right. 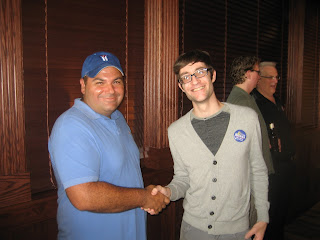 Pictures on my FB page
Posted by Gort at 6:30 PM

Dem here and don't have a dog in the fight but would vote for Tony Brooks if I had the chance. He has some great ideas and is a breath of fresh air. Welcome back Gort we all missed you. Have you heard anything new on your earlier post I believe it was a week ago about Tony George's finance reports. Rumor is that they are very bad. Being a dem the party should be afraid that he is going to ruin the democratic ticket.

Gort I have a bone to pick with you. The man in the right in the last photo in case your readers don't know is Casey Evans, who is the man that proves liberalism doesn't work and will never work in Luzerne County. Every time I see his name it makes me angry that you would even give him the time of day. The event was about Tony Brooks. But if you wanna talk about him lets talk about him. I heard his little speech about "poverty" because he also took offense at calling the drug dealing and murderous section 8 housers at Vermin Hills "scum". He thinks we have to "feel" for the criminals and scumbags that run rampant in the streets and that "understanding" them will mean that they will all become upstanding model citizens. I don't need to "understand" why people get in to doing drugs Mr. Evans, I just want them locked up and arrested and jailed. He brags about how much he likes marijuana too and there were definitely children there. Good example for the kids. It's a crime here, so that makes him a criminal in Pennsylvania no matter what and the event staff should have asked him to leave. Also I overheard him say that he protested with burger flippers and blocked traffic to demand $15 per hour to make fries and screw up peoples orders and he volunteers his precious liberal time at a "needle exchange" and I didn't know what it was until I looked it up and you should too Gort because then you would get to see what we avoided here in Luzerne County by killing this overgrown child's dream of being a politician. Think about how much you'd like being FINED by the county for not being "enviromentally friendly" enough. Better not throw away that napkin or you'll have to pay! He also now OPENLY AND PROUDLY CALLS HIMSELF A SOCIALIST. His words not mine! So he lied about how he liked tax cuts, he lied about being a Democrat, and I want to remind your readers that he viciously opposed and bashed the endorsed Democrat candidates for Luzerne County Council because they didn't meet his far left views and some might say he did his best to sabotage Kick Heffron, Mike Giamber and Renee Cirafouli. He should have been kicked out of the Democrat Party as a liar and an extremist. Oh and during the event the restaurant had Donald Trump's town hall speech on tv and I saw Evans shake his head and say to someone that he knows a few illegal immigrants! Criminals of a feather must flock together. The part that pisses me off most is that he is PROUD of all of this crap! If Evans wants to brag about all of this he should take the blame when his beloved west coast socialist utopia finally crumbles THANK YOU LUZERNE COUNTY for NOT VOTING FOR THIS LEFT WING CHUMP. He makes OBOZO look like Reagan. So STOP giving him publicity he is NOT FROM HERE anymore and if he comes back, have the cops arrest his liberal ass because marijuana is ILLEGAL and promoting it to people is ILLEGAL which makes him a criminal.

Oh and if I were Alex Milanes I would be worried about my political future for being pictured shaking hands with him. Alex is a young and fresh faced Republican and sits on the Arena Board in Luzerne County and he should have made a wiser decision than to let himself be photographed with an extremist.

I hope this is the last time I ever have to see Casey Evans and his sissy looking face ever again, unless it is wearing an orange jumpsuit at the Luzerne County Correctional Facility.

Both Alex and Casey are very good friends who I disagree with but respect their opinions. The first amendment is great, God Bless America. We could all learn something from 2 people with almost polar opposite views who can agree to disagree but not make it personnel.

Dear 3:55 - I don't know who you are or what I did to piss you off so badly that every time Alex and I took a picture you penned one of these, but I want you to know how much I've enjoyed reading them. I was concerned after I left NEPA that I'd never see one again, but as faithfully as you've ever been, here you are. Please don't ever change. You made my day today and one day I hope to buy you a beer* as thanks for the years of amusement you've provided. :-)