We were the 186th and 187th voters in our local polling place out of  about 1000. What a terrible turnout. On the way in there was only 2 poll workers and Plains Twp.plus  incumbent Commissioners Robert Sax and Jerry Yozwiak. I have long said that the only poll workers that matter in a local race is the candidates themselves.

But in this case they were not going to persuade me. They both voted to kick back $3 million of slots money back to the Mohegan Sun to pave the parking lot over the last few years. Then they asked for $1 Million  of slots money to finance an upgrade to the Woodlands. I voted for Barry Kresge.

Being the contrarian that I am I usually vote no on retaining a Judge but in this case I actually voted Yes for State Supreme Court Justices Ron Castille and Max Baer and No on the other 2. What persuaded me was the Tea Party groups and Sue Henry said they opposed them because they blocked the Voter ID law. It should be trashed as it's a solution in search of a problem that will keep people from voting. For all the jokes we make about dead people voting in Pittston it just doesn't happen. Absentee ballots are another matter. All my life I have heard the lament that enough people don't vote (like today) so they want to make it harder. Elections are a bad way to pick appellate judges see Choose Judges on Meirt

Kathy Bozinski reported "that for the first time ever our reporters were told it's illegal to take generic, non-invasive shots inside polling places, and were turned away, or told to shoot through a window. I can't count how many live shots I've done inside the polling place... Is this something new?... We've learned its a regulation that is decided by the County Solicitor, and for apparently the first time, he decided to invoke it for this election."  I saw Pete from the TL at our polling place tonight taking photos and I snapped a few.

The Luzerne  County Website has  a link for election results that looks pretty good. You can tailor the races you are interest in. The thing is they had to go to a vendor to do something that was done in house and worked flawlessly until last spring.  Another waste of money. I like Walter Griffith but the pissing contest that he got into with Lenny Piazza that the county manager Bob Lawton  overreacted to  is costing us money and aggravation 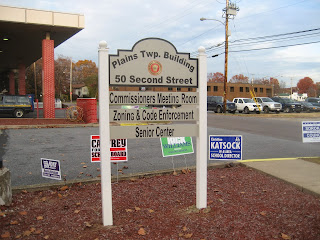 And another ballot screw up

I was asked by the minority judge if I had ID and I replied, "Yes, but not for you. Now if you don't mind, I think I'll go vote."