The latest installment of the Times-Leader inquisitions features the candidates for Treasurer. Mike Morreale stresses his experience and takes credit for making many office records computerized during his latest term, eliminating ledger books. His claim to fame is joining Steve Flood and Steve Urban to revamp the county pension fund. It was a pretty ballsy thing to do (bucking the powers that be) and the results show it was the right decision.


Morreale said his support for a change in pension fund management helped the fund to grow from $140 million to around $214 million while saving $1.2 million in money management fees. The performance of money managers is presented at public meetings, and money managers must come in for reviews if they under perform, he said.

I've heard that there is an investigation going on about some missing funds from the office but nobody wants to talk about it.

Morreale said he was proactive when he detected an odd pattern of tax bill check recording in his office. While all accounts balanced, some of the tax bills were marked as paid and then voided and then paid again in the office computer system. He referred the matter to the county District Attorney’s Office, which is investigating.

His opponent is Republican Gina Nevenglosky who says she would be a full-time Luzerne County treasurer with no outside employment if elected. She says it's time for change after 27 years and takes a swipe at Morreale's age.

“There is also a need for a treasurer who is able to stay alert during commissioner meetings.”

She will have an open-door policy, likes to hunt deer and will keep the current staff in the office. The only change she offered is

... she wants to explore the possibility of requiring licenses for cats to bring in new revenue and discourage overpopulation of cats.

Ptolemy objected to that proposal pleading poverty (he's still unemployed and owes me a bunch of money) and saying "Don't blame me for too many cats, they cut my nuggies off long ago." What's next, mandating seatbelts for dogs? 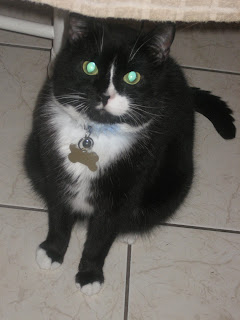 Mike Morrealle was first on the ballot for treasurer when I voted for the first time. It was alright for the first couple of terms but I didn't realize he was going to hold onto the job like a Pope.