But that terrorist is a retired Marine officer and elected official. Poor choice of words Greg.

According to the CV Luzerne County Commissioners Greg Skrepenak and Steve Urban got into another argument about reassessment that included Skrepenak calling Urban "a terrorist" for trying to "strike fear" into county residents.

Urban has oppossed Skrep's plan to send out a notice of assessed property values without telling the homeowners how it will affect their taxes. What is the sense of telling you how much the local government thinks how much your house is worth but not tell you if your taxes are going up or down, and by how much?

Skrep has criticised Urban's management of the reassessment process and took the project away from him then told everyone he has restored calm to the process. He said "That's the sign of a leader"

And what is this about Democratic appointed commissioner Rose Tucker showing up at a fundraiser for Republican commissioner candidate Bill Jones? 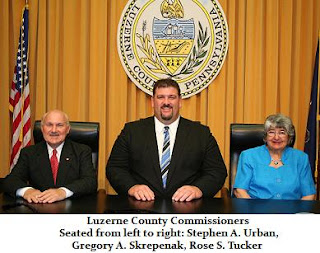 What an asshole. I don't really care for Urban, but Skrep is just ridiculous.

So, since Skrep is now "involved" in the reassessment issue, I guess HE'S the one I should call to find out if my taxes are going to go up or down???

Skrep is a bum (to put it nicely). We pay a HUGE sum of money to a company to provide us with IMPARTIAL reassessment values, and when the good ol' boys realize that 21st Century really is being impartial, and that they are expecting the good ol' boys to pay their fair share, the boys tell Skrep that the county must get involved with helping to calculate the values. That is why Skrep booted Urban, because Skrep is the kinda guy who will tell the appraisers at 21st century:

"No, no, no, that value can't be right. Grunt, snort, wheeze. He's a friend of mine. Wheeze, grunt. Are you sure his property is worth that much? Wheeze. Oh, it's not? Great! Here's another contract for you. Grunt, wheeze, wanna go for lunch - taxpayers, oops, I mean, I'm buying. Do I have steak sauce in my goatee?"

Anyone out there wanna tar and feather a fat broken linebacker and then run 'im outta town on a rail?