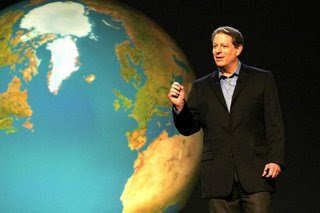 Susie has been chanting it for months as have others.
.
So Al Gore added to his hardware by winning the Nobel Peace Prize. He also won an Oscar and an Emmy so now all he needs now is a Tony and a Grammy. I'm sure he can sing better than John Ashcroft. And we all know that he won the People's Choice Award in 2000.
.
I haven't picked a candidate for President yet because I believe that any Democrat can win the White House next year. Against the Republican pygmies (thanks Newt) I would vote for the Easter Bunny, even paint eggs for him. If the Democratic nominee is anybody but Hillary it won't even be close.
.
So far it looks like a contest between Hillary and Obama with Edwards leading in Iowa but running out of money. I like Mike Gravel because he speaks his mind and Mrs. G's favorite is Dennis Kucinich for the the same reason but they are not going to get the nomination or even come close. The sleepers are Bill Richardson, Chris Dodd and Joe Biden who are as qualified or more to be President as the big 3.
.
The small "d" democrat in me hates the idea of Bush, Clinton, Bush, Clinton. Not that I don't think that Hillary wouldn't be a good President but we are a nation that should not let the same 2 families run things for 20+ years, it's not healthy. Barrack Obama is exciting and represents a generational change along with getting over some other hangups. I'm not going to worry about what's on his lapel.
.
If the Vice President gets into it the race instantly comes down to a choice between him and Senator Clinton.
.
Run, Al, Run. You will make this guy happy.
Posted by Gort at 2:31 AM

Thanks for the link gort, but remember I didn't have a problem with him, or any other person wearing or not wearing a lapel pin. I did, a still do, have a problem with his questioning of good people's patriotism who wear choose to wear one.
It demonstrates that he is what I, and many middle class conservatives, view as just another elitist democrat.

I agree with the lapel, I thought his response was stupid, he should have just said who cares?

I agree Richardson and Biden are my favorite dems then hillary and i would vote for any of them over Romney.

Woud you8 prefer any of them over the good Dr. ron Paul, who is my gravel. I disagree with poaul about styaing in iraq(but I agreed with him about going in) but i like him on everything else. he makes gtoldwater seem like a tax and spend liberal

Instead of Iraq, we would be in Venezuela "freeing" the oil supply from the evil Hugo Chavez.

The left wing falls pretty easy into line if you use the right buzzwords.

Gore is like the bride hiding her blemishes until after the wedding--looks great now but come the morning light, reality sets in.*

Your liberal media at work. Forget issues when we can talk about flag pins, haircuts, cleavage and laughs.

I with Bill on Ron Paul. I hope the Libertarians nominate him again.

If Ron Paul is going to have a lasting impact on the party, he needs to finish in the top 3 in some large states. It would finally show the Republican party that we want real fiscal conservatives in office and we do not want a nanny state.

We would be better off if the government focused more on fixing our crumbling infrastructure and improving our national defense versus choosing the winners and losers in the economy.

What happened to the Republican party I grew up with. You remember them. Balanced budgets and keeping the government out of your life.

Al Gore is way too smart to want to be President anymore.

I think Bush should be kept after school until he cleans up the mess he's made - no speaking engagements or chairmanships until he's done. Can this pooch be unscrewed?

I really don't get it. He did no research, just read what was given. His house consumes more power than 10 others in the area. His "carbon footprint" is much larger than the rest of us while he's "spreading the word".
AND......many points in the movie were proved to be false. See http://newsbusters.org/blogs/noel-sheppard/2007/10/09/court-identifies-eleven-inaccuracies-al-gore-s-inconvenient-truth
Sorry if I don't get what this has to do with peace.

The Republican party sold itself out to certain interest groups who are never satisfied until the country matches the exact vision they seek. Instead of being the party that promoted ethical action, we violated the confidence of the people through letting the guilty keep their ill-gotten gains (through illegal immigration and bilking those most susceptible to "snake oil salesmen").

For as much as we lionize Ronald Reagan, debt and government spending skyrocketed under his watch. Democrats were always the party of tax and spend. We became the party of borrow and spend. Instead of maintaining the conservative mantle of "if it's important enough, the state will fund it", the party became more concerned with corporate welfare for companies who deserved to fail.

We could have made the world better post 9/11. We could have invested in technology to maintain our standard of living, but instead we encouraged people to margin our daily lives on debt to levels not seen since the 1920s.

Using the same playbook as 2000 won't save us. Unless the resolution passes to break up the California electoral votes by Congressional district as opposed to the common winner take all system, there will be a Democrat in the White House (probably Hillary). The only way to keep taxes at bay in the future is to ensure the Republicans take back one of the houses of Congress in 2008. Otherwise, there will be plenty of calls to increase marginal tax rates to levels seen in the 1970s.

Who is smart enough and capable enough to take on Pelosi and Reid? Who actually understands the problems our country faces? Who is willing to be different and not follow the current talking points?

We've seen the positions of 3 different candidates. Of those three, the one that is farthest away from the current conventional Republican wisdom is the one who will make Chris Carney a one-term congressman and send him back to PSU-Scranton to rethink his research.

Kelly, you clearly have not looked at Carney's economic positions. I don't know if you’re aware but he is a member of the Blue Dog Coalition. As a group they are fiscally conservative and they advocate that more spending be focused on making our military stronger. Check their web site. I wouldn't hang my hat on the challengers out there with their fiscal record. One made his fortune from Medicare reimbursements and the other charges companies $20/ hr for an employee then turns around and pays the same guy $8.

the Blue Dogs are fiscally conservatives compared to other dems but they still belive in pork barrel politics. carney has been to the right of most of the dems but he has supported tax increases. Hackett seems like he will fight pork, while mueser has been silent on the issue. If we want to go on past recorsds why mention Carney's work with Doug Fife.

Groups are one thing, but let's be honest here. The Blue Dog coalition won't stand for their principles when Nancy Pelosi needs their votes for the Quid Pro Quo she has provided. Patrick Murphy is "Blue Dog Democrat" and a King's grad. Go ahead and look at his campaign contributions. I doubt he cares much about building up a stronger military when his largest campaign contributor is MoveOn.org.

Before I go off track too much, let's look at Chris Carney's contributors.

The number 2 contributor is the United Auto Workers. Last time I checked, there isn't a significant auto industry in the 10th district. When the union is unable to handle the new financial realities of administering the pension costs of their workers, do you think Chris Carney is going to let them hang in the wind or bail them out through government coverage?

If that isn't enough, let's look at his committee assignments. Chris Carney is a member of the Transportation and Infrastructure Highways and Transit Subcommittee. This is the committee responsible for providing funding for the bridge collapse near Minneapolis. How much of a Fiscal Conservative can he be when, well, let's put it in the words of Paul Kanjorski to add emphasis:

"Minnesotans “discovered they were going to get all the money from the federal government and they were taking all they could get,” he said. They took the opportunity “to screw us,” "

Anon, please direct us to the Congressional Record where Chris Carney was against such funding over the normal limits. If Chris Carney thinks such action is that of a fiscal conservative, maybe he should pursue some additional academic courses in Public Finance once his term ends in January 2009.

Meuser has signed Grover Norquist's "pledge" to not raise taxes. Unfortunately, due to Norquist's close association with Jack Abrhamoff, that will garner as much bad karma as signing a "protect the children" pledge connected to Michael Jackson.

Hackett will fight pork as much as the Ledgedale BBQ Pit out of Hamlin would. Hackett receives a significant portion of income from recycled Luzurne County employees.

You don't ask a fox to guard a henhouse.

In an emergency decision the Supreme Court invalidated the vote for the Nobel Peace Prize and awarded it to Geoge W Bush.