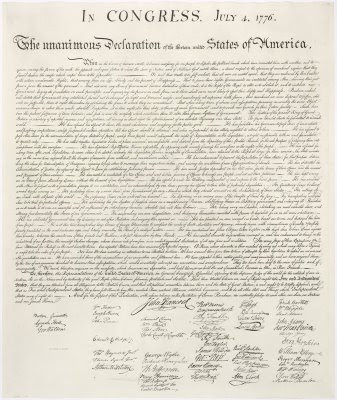 We, therefore, the Representatives of the united States of America, in General Congress, Assembled, appealing to the Supreme Judge of the world for the rectitude of our intentions, do, in the Name, and by Authority of the good People of these Colonies, solemnly publish and declare, That these united Colonies are, and of Right ought to be Free and Independent States, that they are Absolved from all Allegiance to the British Crown, and that all political connection between them and the State of Great Britain, is and ought to be totally dissolved; and that as Free and Independent States, they have full Power to levy War, conclude Peace, contract Alliances, establish Commerce, and to do all other Acts and Things which Independent States may of right do. — And for the support of this Declaration, with a firm reliance on the protection of Divine Providence, we mutually pledge to each other our Lives, our Fortunes, and our sacred Honor.

Aren't there some separation of church and state issues with this document? "Supreme Judge"? "firm reliance on the protection of Divine Providence"?

Next thing you know you will be calling our attention to Old Testament stories and quoting extensively from the Bible like Thomas Paine did in "Common Sense" when he argued against the monarchy from scripture:

"As the exalting one man so greatly above the rest cannot be justified on the equal rights of nature, so neither can it be defended on the authority of scripture; for the will of the Almighty, as declared by Gideon and the prophet Samuel, expressly disapproves of government by kings. All anti-monarchial parts of scripture have been very smoothly glossed over in monarchial governments, but they undoubtedly merit the attention of countries which have their governments yet to form."

You turing into a right-winger?