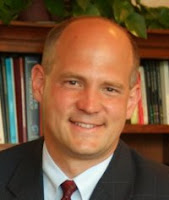 My friend and political sparing partner Dr. David Madeira is running for the Republican nomination in the 10th Congressional District to take on incumbent Democrat Chris Carney.

Madeira came in a surprising 2nd to Lisa Baker in the 2006 Republican primary for the 20th State Senate seat. My favorite memory of that race was the argument between Dave and Russ Bigus about who had shot the most animals in their lifetimes. He was looking at taking on Carney in 2008 but decided to back Chris Hackett's bid and took a top job in his campaign.
.
Madeira is a graduate of Bob Jones University and the New York Chiropractic College and practiced for 20 years even serving as President of the Pennsylvania Chiropractic Association, but gave up being a back cracker for a business and political consulting gig.
.
After helping Hackett's campaign go down in flames he started a political blog and tells me that I was the inspiration (blame) for it because I had the audacity to opine that Chris Carney has been a good Congressman.
.
I talked with him on Monday and he accused Carney of deception and opposes the stimulus bill that kept us out of another depression. He opposes Health Care Reform calling it socialized medicine and has pledged to repeal it if he is elected. On his blog, Could we please have our country back now? , he is crowing about the election result from Massachusetts tonight. And he doesn't like earmarks. Good luck explaining that to every local government in the 10th district that needs a piece of pork to buy a new fire truck or put in new sewers because they are tapped out on the property tax.
.
Dave hasn't done the FEC paperwork yet so we don't have an official website but you can read his thoughts on his Facebook page and blog. Some other media coverage:


Malcolm Derk is the only official candidate so far but Tom Marino is expected to get into the race and Political Pike points out that Ted Yale has announced on his Facebook page that he is running for the Republican nomination.

Madeira has promised me an interview in a few weeks. Send me your questions.
Posted by Gort at 7:26 PM

Jimmy Carter should give thanks to God before turning in tonight, as Mr. Obama has now replaced him as the worst President of the last 100years. With the election of a Conservative Republican to the US Senate from the most liberal state in the Union, we now have a precursory view of the high turnover to come in November (as I had predicted in previous posts). WHat Mr. Obama (and the young people who support[ed]) him fail to understand is the reality of kitchen table politics. You cannot balance a family budget by maxing out your credit card and neither can the government. The breadth and depth of the nation is highly Conservative. Mr. Obama came to election because these very Conservatives "shirked" their responsibility and stayed home on Election Day '08. Thankfully, a fire has been lit under all responsible and decent AMericans and we shall soon see a return to sensible and functioning government; a government where the prime responsibility of the State is to provide for the common defense, not tax and spend through the roof. Students, I would not be surprised if in some way history repeats itself, as the next President of the United States may very well be a young man who had a meteoric rise from the State Senate to the US Senate to the White House--namely, Mr. Scott Brown! Class dismissed!!!

Madeira should step aside now before he starts attacking the other Republican candidates and Marino shouldn't bother getting into the race. Malcolm Derk, who more and more people are begining to take serious, is a young conservative that represents the values of the district.

I completely disagree with PA-10 Republican.

I want whoever our republican nominee is to survive through a primary first. I like what I have read from Dirk's campaign site and from Madeira's blog and look forward to seeing how they do in a campaign. Proving your worth in a campaign is a lot tougher than saying you are running, however.

Gort - Here are a couple questions for Madeira (and any other candidate who is willing to be interviewed): What makes you the best of the republican candidates?

If you win the primary, can you raise the money necessary to get your message out when Carney is sure to have big bucks?

12:27 Another Republican who thinks'he is God!