Madam Speaker, The President of the United States 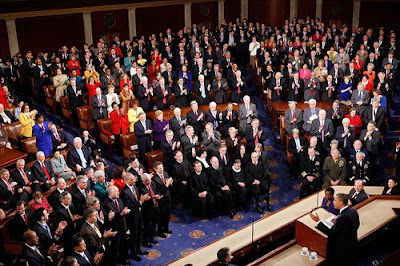 Ever since I became interested in politics I always loved ceremony of the State Of the Union speech from the President no matter who was the occupant of the White House at the time. I have to admit that the Brits do it better with the Queen's Speech or the Speech from the Throne as it officially called. I won't do the play by play because there is plenty of other bloggers that did that and no matter what he said it won't change the minds of people on one side or another.


“The president offered a hopeful message about our country’s future and I credit him with seeking to inspire optimism. Our economy is showing signs of recovery and I have tremendous faith in the resilience of our working men and women. But we must give our businesses and organizations the tools they need to make bold decisions that will lay a foundation for the future and do so by coming together in a bipartisan manner. I will continue to do everything I can to support the increased growth of our businesses and help our local economy, whether it be through small business tax credits or the elimination of capital gains on small businesses. I am also proud to have fought tirelessly in opposition to the tolling of I-80, a move that would have disastrous consequences on our local economy.


I was pleased to host Austin Burke, president of the Greater Scranton Chamber of Commerce and a resident of Archbald, as my guest at the State of the Union. Mr. Burke knows all about being visionary. Rarely has a week gone by when we haven’t worked together to help get funding for an area business or business park. He is planning for northeastern Pennsylvania’s economic future in ways that should serve as a guide for others to follow.

While many families continue to struggle during this difficult economic climate, we must not forget about the sacrifices borne by our brave service men and women who are fighting on the front lines in Afghanistan and Iraq. We must not back down from the terrorists who threaten the security of our country.

I was disappointed the president did not discuss the failed Christmas Day bombing in greater detail and the steps he plans to avoid another near terrorist attack. Keeping our citizens safe is my top priority in Congress and we must feel confident that this administration has learned its lessons from the communications breakdowns and know that improvements are quickly being made.


“Tonight, President Obama spoke openly to the American people about the struggles we face and how we can improve the lives for everyone going forward. Now is the time to work together to address the complex problems that reach way beyond the partisan bickering that has too often overwhelmed real debate on the issues. As the President said, we owe it to the American people to move forward, create more American jobs, reform Wall Street rules, control excessive spending, and turn our economy around. I very much agree.

“During the past two years, far too many Americans have personally experienced the devastating consequences of the economic crisis. Since joining Congress, my top priorities have been job creation and economic development, particularly in Northeastern Pennsylvania. During these difficult times, I agree with the President that we need to enhance and expand efforts to generate more jobs.

“The Recovery Act has preserved jobs throughout the nation, but we can, and we must, do more, much more. With my support, the House has already passed the Jobs for Main Street Act to create more jobs here at home. We must also do everything reasonably possible to turn the tide of our economy and improve the well being of every American. I am committed to doing just that. As I have continued to stress, fixing our economy will not happen overnight, but I have faith that we will emerge from these tough times stronger than ever.

“As we work to create new jobs, more jobs, and better jobs, we must also take action to change the rules of Wall Street and rein in the biggest financial institutions which caused the current crisis. As the President stressed, reforming Wall Street is essential to preventing another economic crisis like the one we just experienced. In December, with my strong support the House passed a Wall Street reform bill. This bill included my amendment to limit the risk of financial companies by preventing them from becoming ‘too big to fail.’ The President’s remarks tonight only strengthened my resolve to enact into law a common-sense financial regulatory reform bill to better protect the financial security of every American and fundamentally change the way Wall Street operates.

“Finally, the President outlined his plan to address the looming federal deficit. Because I worked with President Clinton to turn a massive deficit into a sizable budget surplus, I know we can fix this problem. To reverse the vast deficit built up in the last 8 years, we must now make tough choices. By making prudent fiscal decisions and creating a bipartisan budget task force, as the President stated, we can once again work to reduce our budget deficit, focus on national priorities, and decrease spending.”

“Is it any wonder we’re in the shape we are? I just watched the president and a room full of Washington politicians pat themselves on their backs for an hour. I’m not sure why they’re so happy. Like millions of Americans, I watched tonight’s speech looking for hope and solutions. What I saw was a pep rally and statements of the obvious. The House chamber was full of smiling politicians at the same time moms and dads are sitting around their kitchen tables worrying about how they’re going to pay their bills and make ends meet. I wasn’t hoping for a homerun tonight—just a good at bat. What we saw was a lazy fly ball. Tonight’s speech shows there is still a massive disconnect between the politicians in Washington and the residents of the 11th Congressional District. People here want smaller, more fiscally responsible government. They want to see meaningful reform enacted, not just hear lip service. They want to support programs that create new jobs, not new bureaucracy. They want common-sense solutions. They’re tired of the blank-check attitude of the career Washington politicians. More government programs and more spending are not the answer.”

The President's impressive speaking abilities cannot hide the fact that he continues to defend the same tired old trope: the proposition that an omnipotent government can allocate our resources more efficiently than a free people acting through free markets. Whether it's increasing government spending or making our excessively complex tax code even more complex, the President seeks to allocate an increasingly large share of our resources through government programs. Ironically, he cites the experience of China and India in support of his call for bigger government, but those countries did not begin growing rapidly until they dramatically reduced the role of their governments in allocating resources.

The sad fact is the President Obama simply doesn't believe in our unique system of ordered liberty; instead, he prefers to govern as if the U.S. Constitution were an historical artifact of no practical significance. Our Founding Fathers did not create a limited government because they were insufficiently intelligent to create the virtuous omnipotent government that President Obama prefers; instead, they created a limited government because they were too wise to believe his platitudes about perfecting government through campaign finance laws, ethics reforms and bipartisan commissions.

In short, the President believes the American people cannot grasp the glories of his plans, but they have rejected his vision, and they, like me, are working to restore our freedom, which is the only path to prosperity. We don't need more clever presentations of 1970s style liberalism; instead, we need truly original thinking grounded in a firm understanding of traditional American values, and that's why I'm running for Congress.


I haven't received a statement from the other candidates yet.


Visit msnbc.com for breaking news, world news, and news about the economy

it seems to me Bareltta stole one from the Obama play book at patting ones self on the back, read this story
http://standardspeaker.com/news/barletta-touts-solar-farm-at-state-of-city-address-1.577127

out of the 175 people sitting there, NOT ONE person had a question for the pie in the sky ideas of Barletta?????????