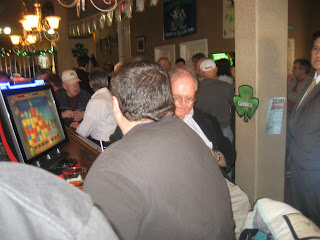 All I can say about the turnout is WOW! I was expecting maybe 50 people if we were lucky but the CV put the total at 125-150. Many thanks to the staff at Rooney's Irish Pub for the great service in handling the unexpected surge in business.

Now for some Gonzo Journalism with a link heavy post that I'm sure will omit someone so let me know if I missed you.

We picked up the Blogfather and headed to wilds of the Tomato Capitol arriving a few minutes after 5PM to find the place was mobbed already. I walked in the door to find my friends and regular commenters Pope George Ringo and Forest Gump set up a command post at the bar. Mrs. G sat down next to them and I immediately started working the room.

The first candidate I spotted was State Rep John Yudichak who is running for the Democratic nomination to succeed Ray Musto in the 14th District and wanted to know how I came up with nickname Yuddy for him. Actually that came from lost long blogger Bill Fitz. His Democratic opponent W-B Mayor Tom Leighton told me to expect a big announcement next week that may make some people unhappy. The Republican in the 14th Senate race Luz Co Commish Steve Urban and his wife Linda hung out all night. Urban is also running for Lt. Gov


GOP 11th CD candidate Chris Paige who dropped his bid a few days ago was there but America's Mayor took a pass. I had a nice chat with Kanjo's campaign manager Joe Werner but I didn't run into anybody from the Corey O'Brien camp. Steve said they were all at the cage fight. WTF?

All 3 candidates running in the 120th State Rep race worked the crowd. Incumbent Phyllis Mundy (D) wanted to know if I was "just blowing smoke" when I said she was my favorite house member. I assured her that I appreciate her work on health care including supporting a single payer system for PA and holding the Blue Cross not-for-profit company (?) feet to the fire. The top people of that company can be paid 6 or 7 figure salary's while building up a surplus far in excess what is required by law then hand it out for various projects. Republican West Pittston Mayor Bill Goldsworthy promised a vigorous campaign. The Libertarian candidate Tim Mullen
is very interesting . The Greens and Libertarians always run candidates for office that are long shots like President, Senator or Governor. My advice to them has been to build a bench by geting candidates to run for a local post like council, school board, state rep, etc. He is doing that.


121th Jim O'Meara was available he is taking on Eddie Day who didn't show up.

119th Gary Zingaretti and Bob Morgan booked interviews. I was very disappointed that Mullery didn't make it.
.
From Lackawanna County we had 114th State House candidate John Moran and State Senate
hopeful Frank Scavo.
.
Jake Digel brought a posse that is supporting Senator Arlen Specter and Mike Dineen was their plugging Dan Onorato for Governor.
.
Past candidates Joe Terrana and Dr Joe Leonardi joined into the fun along with Terry Best, Pittston Mayor Jason Klush and Exeter Mayor Casandra Coleman.
.
A few State Committee candidates made the rounds including Sabrina McLaughlin and Tom Shibulla. I don't pay much attention to those races but anyone who is running for a spot on the GOP or Dem State Committees is welcome to do a guest post.
.
Who did I miss?
.
Elizabeth Skrapits has nice write-up in the Citizens Voice. My Cover is blown.

Candidates meet the faces behind the screen names

Bill O'Boyle of the TL was also there gathering info for a future story.

Lu Lac
Not Cease
Circumlocution
Another Monkey
ABFS
.
Norton
Pittston Politics
.
NEPArtisan
.
Photo's can viewed at this link.
.
The next Saturday OT Committee and Operatic Society will be at Mark's Pub in May to watch the Kentucky Derby like we have done for the last 13 years.
I think that since this was such a success the next mega-meetup will scheduled for the fall and we will invite not only the locals but statewide candidates.
Posted by Gort at 3:20 PM

Corey Obs campaign manager was there at the event. Joe Werner was there but Paul Mini Me Maher was not is he going to take over and be the new mini me in Austin Powers the sequel. Oh very very interesting

This mini me bullshit is starting to get old.

Great event gort. The local blogosphere's importance has been not only recongized, but acknowledged.

I think Tim Mullen has a great chance of becoming one of our next State reps. People are getting tired of the duopoly we have been coerced into. Its time for real "change" and Tim Mullen can do that. Be an informed voter and find out more at www.votemullen.com

Gort - GREAT job on the event! Looking forward to the fall.
Joe V

Thanks for the Shout Out. I love Yuddy, especially when he said He endorsed Kanjorski's retirement to our class at King's(spring 06)

Also i think I heard him say he was writing a book on Dan Flood. Any Word

150 Wow I remember when We had like 12-15 people one time and considered that big.

Gort nice blogger event i dont go to bars so i did not attend but looked like a great turnout.

And you were going to quit blogging...you're a star!

Excellent event! Excellent job by all bloggers, candidates and interested voters! It's great to see so many people engaged in the process this time around. Excellent job by Rooney's staff for handling the unexpected size of the crowd! Already looking forward to the fall event. Can't wait to see the Saturday OT and Operatic Society members in May for the Derby.

This could and robably will be a very important tool for candidates in the future. I'm not actively involved in politcs but I do read many of the blogs. I think they provide a great service but they do have to stay neutral to maintain credibility. There is only one blog that I notice seems to take pleasure in the ability to take things to a personal level. That's too bad because it weakens all blogs. To all the others, I congratualte you on the neutrality of your blogs and thank you for giving an oportunity to those who don't have the big campaign bucks. You guys/gals level the playing field. Please continue to keep it neutral.

When blogging first came out, the "old media" ignored it. Then they made fun of it. Then they got angry about it. Now they're covering it??? Then they realized it's here to stay like Rock 'n Roll!!! It's only the people!!!

Jane Waitkus from Mt Top here. Gort, great to meet you at the event-didn't know what to expect crowd-wise-nice surprise. As we discussed, I am also running for Dem. State Cmte in Luzerne Co. I'm excited to see many candidates in this race-grassroots politics rules.