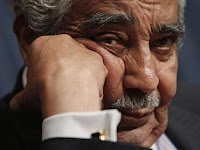 Just about every campaign has a few of these give the money back squabbles.

In 2008 Paul Kanjorski's camp demanded that Hazleton Mayor Lou Barletta return a contribution from crooked Alaskan Senator Ted Stevens. I don't think that he did. Kanjo got some cash from NY Congressman and Ways and Means Chairman Charlie Rangel who is under fire for ethical violations and the Republicans are apopolectic “It comes as no surprise to the residents of Pennsylvania’s 11th Congressional District that Paul Kanjorski has once again chosen personal greed over ethical and decent behavior,” GOP Executive Director Renita Fennick said in a PR. Ed Mitchell says the Kanjorski campaign hasn't decided to give back the money or donate it to charity or just keep it. Democratic primary opponent Corey O'Brien piled on “Decisions like these, to not return or donate the money, are why we’ve lost confidence in our leaders.”

A few days ago Malcolm Derk sent out a release demanding that Congressman Chris Carney "should immediately return this tainted money” from Rangel.

TL: U.S. Rep. Chris Carney will send $21,000 from his campaign war chest to a local charity, keeping a promise that if embattled U.S. Rep. Charles Rangel were ever found to have violated House ethics rules, he would return the money.

I've received emails from the Derk camp and others taking credit for Carney's decision to dump Rangel's money like so many others across the country.

Another 10th CD Republican candidate Dave Madeira says:“Chris Carney may parade himself as a bipartisan fiscal-conservative, but the truth is revealed in his sources of income. Even without the scandal, what is Carney doing taking money from Rangel,” Madeira
asked “Better yet, what does Carney owe Rangel for that $21,000?”

Most of the time these inside baseball arguments are don't register with voters. Maybe a public financing scheme for Congressional campaigns is the best way to get past it. An added benefit would be that the "special interests" won't be able to buy legislation.
Posted by Gort at 3:06 AM

Except, of course, that Mr Stevens is not guilty.

On July 29, 2008, Stevens was indicted by a federal grand jury on seven counts of failing to report gifts received from VECO Corporation and its CEO Bill Allen on his Senate financial disclosure forms, formally charged with violation of provisions of the Ethics in Government Act. Stevens pleaded not guilty and asserted his right to a speedy trial, which began on September 25 in Washington, DC, to have the opportunity to clear his name before the November election. On October 27, 2008, barely a week before the election, Stevens was found guilty on all seven counts.[1][2] National Public Radio reported on April 1, 2009, that United States Attorney General Eric Holder, citing serious prosecutorial misconduct during the trial, decided to drop all charges against Stevens—an action that vacated his conviction.[3]

So not guilty means guilty but with a real good excuse?

Listen up folks, it takes a lot of money to get elected and I don't give a damn where it comes from as long as there are no strings attached. The character of the recipient is the bottom line. Take a donation from a tainted source and if no quid pro quo is involved then who the hell cares. This stuff is coming to the forefront now but the big Republican donors have been doing this for years. The old saying was always, "Republicans raise their money in Board Rooms, Democrats raise it in Bar Rooms." Look like the playing field is leveling off and the Republican don't like it .... tough! I look at the way a politician votes, not who helped him get elected.