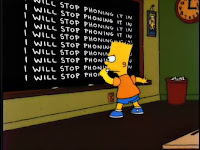 Congressman Paul Kanjorski likes to do business by telephone. In the last year I have been invited to participate in numerous telephone town meetings but was unable to dial in because I was at work at the time.

As the Democratic representative on the Pennsylvania Stimulus Oversight Commission -- the organization that oversees and directs federal stimulus spending in the Commonwealth -- Paul Kanjorski only attended ONE of the TEN meetings. According to meeting minutes available online, neither Kanjorski nor a member of his staff attended SIX of the TEN meetings. That’s an attendance rate of 40%.

He is also hitting Kanjo for claiming that he is "too busy" to debate him 10 times before the primary election. The person in charge of the commission told the TL that said a member of his staff has participated in every meeting via telephone but she omitted that from the minutes that are published online. “One of Congressman Kanjorski’s staffers has participated in every meeting of the Stimulus Commission via telephone,” Kanjo spokesperson Abbie McDonough said. “Anyone who thinks otherwise needs to get their facts straight.”

Maybe the staffer or the Congressman should show up in person for these meetings. Kanjo has held live town halls in the past in which he has said some controversial things and seems to be playing it safe this time around. With the Teabagers showing up and disrupting these meetings across the country I can understand his reluctance but my I advice to Democrats is simple. Take a position and defend it. From what I have seen of these Tea Party people and have read in the press they are the same names and faces that I have been seeing at GOP events for years. Despite what FOX News tells us there is nothing new about this group, it just has another name . 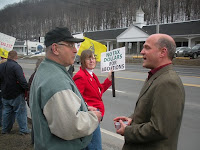 Flying under the radar Kanjo is looking to limit the Citizens United decision of the Supreme Court.
Posted by Gort at 2:22 AM

Breaking....there's some bullshit going on somewhere...

Where is Paul Maher or should I say Mini Me. Couldnt he show up to these meetings he doesnt do a thing.

Mini me mini me