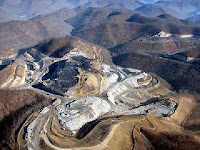 According to a flack from the American Petroleum Institute the fracking process of getting natural gas out of the ground will not pollute the drinking water in the area. Ask the people of Dimock in Susquehanna County about that. She claims that there is enough regulations in place by the PA Department of Environmental Protection although the DEP has been playing catchup. They don't have enough inspectors to deal with what has been already approved and the latest state budget calls for drilling in state parks in Harrisburg's never ending quest for more revenue. Now they think that table games at the casinos will be the salvation but that is a different subject.

Sara Banaszak argues that a severance tax like just about every other state imposes will drive drillers away. I doubt that because there is to much money to be made. She also said the EPA should not get involved and Congress should keep the exemption to the Clean Water Act that Haliburton's chief lobbyist Dick Cheney got passed.

There is a bill in Congress to give the EPA jurisdiction over this called the Fracturing Responsibility and Awareness of Chemicals (FRAC) Act. The last time I talked to Congressman Chris Carney he was noncommittal on this bill. That's a surprise.

He gave us this statement:

Washington, D.C.—Congressman Carney (PA-10) released the following statement today in response to the Environmental Protection Agency’s announcement that it will conduct a comprehensive research study to investigate the potential adverse impact that hydraulic fracturing may have on water quality and public health.

“Ensuring our community has safe drinking water in the midst of our natural gas boom is of significant concern to me and my staff and I welcome the Environmental Protection Agency’s announcement that it will conduct a comprehensive study to review the effects of hydraulic fracturing. I supported legislation last year directing the EPA to conduct this analysis so that we can determine whether the fracking process requires more federal oversight.

The Marcellus Shale has presented our region with a tremendous economic opportunity and we must take every step necessary to ensure that the health of our families is not compromised as a result.”


Sorry Chris but this is mush. The state and federal governments need to get a handle on this before this turns into another environmental disaster on the scale of what happened in the last 2 centuries as a result of coal mining. We can live without a lot of things but clean water is not one of them.

I haven't been paying as close attention to this issue as I should but my blog buddies have and they can explain more about this issue than I can .


Frack Mountain
Posted by Gort at 3:05 AM

Sure, it's always safe to pour toxic chemicals down into the ground...you know, where our drinking water can be found. This sounds like the serial denials issued by tobacco companies.

You would think that people in this area, with its history of physical damage via anthracite mining, would be especially sensitive to this sort of thing.

Based on the industry's own estimates, the average natural gas well requires about 4 million gallons of contaminated water be pumped into the ground annually. Of that amount, they recover & recycle, at best, about 800,000 gallons. In addition to the original contaminants added to the water to promote the fracking process, often the water picks up radiation from the rocks it is forced through.

Yeah, sounds safe to me.

Word around Wilkes-Barre is that Leighton thinks he has the Senator seat in the bag already. His camp thinks that Kanjo is going to deliver it for him and he is going to deliver the Congressional race for Kanjo. They don't think Yudichak has a chance.

Where is Leighton on this drilling/polluting issue? It should become a standard question for all candidates.

Frack drilling is an excellent question but let's not allow Yedichak off the hook for his house buying per diem sneak deal. Yes he did refuse the midnight raise the first year but I hear it is in his current pay check.