They both favor the tax but differ about how the proceeds should be distributed. Boback wants more money coming home to the local municipalities while Shermanski wants to fund the Department of Environmental Protection.
Shermanski sent me a double barrelled press release:

SHERMANSKI ASKS: WHAT IS KAREN HIDING?
Who represents you in the PA State House? We hoped to have the opportunity to learn a little more about our state representative at a debate on October 21 – at least we wanted to, until Representative Karen Boback refused to meet Richard in a debate on October 21st.
Richard began reaching out to the Boback campaign back in August to schedule this debate. After the League of Women Voters began to make the event a reality, Karen decided that she had a prior commitment that night – waiting weeks to declare that she was unable to appear.
The families of the 117th deserve a fair shot at meeting their representative – and finding out why Richard would make a better Representative. Boback’s record in the House has often left voters wondering, “What was she thinking?” But, now, they’re forced to think “What is she hiding?” Why is she so afraid to face her constituents in a forum where her views might be challenged by an opponent?
A few things that Karen might be hiding...
• Why did she vote to support large gas extraction corporations over the safety of families in the district?
• Why does she continue to receive campaign donations from major corporations from outside the region?
• While she’s been in office, the PA House has repeatedly failed to pass a budget on time – and then, when they were set to do so, she voted against it.

Want to know even more about what Karen isn’t doing for the families in the 117th? Want to know what Richard plans to do to help our families and communities? Give us a call at 570-592-4766.

SHERMANSKI APPLAUDS PA HOUSE FOR VOTE PROTECTING OUR ENVIRONMENT
In the course of this campaign, we’ve always put the constituents of the 117th first. We’re not about supporting companies that aren’t based in the area and protecting them when they don’t even employ workers in our area. That’s why we’re so pleased the State House stood up to outside interests, even though Representative Boback caved to pressure from her friends in the corporate world.
What’s worse is that Karen and the party leaders she supports tried to deceive the people of Pennsylvania by offering up a frightening argument about jobs. The Republican argument about job loss is ludicrous. There’s no way oil and gas companies will abandon the state and give up these profits – not when we’re sitting on top of what’s been called the Saudi Arabia of natural gas.
Representative Boback and her party bosses that she takes her marching orders from were perfectly willing to sacrifice the quality of life – everything from the roads we drive on to the water we drink – of the families that live and work in the 117th. It’s incomprehensible that Karen voted against providing the counties and municipalities impacted by these drillers with the tens of millions of dollars they will need to repair their roads and protect their water supplies. She once again put special interests ahead of the interests of Pennsylvanians.
We are at a crucial juncture in the birth of the nature gas extraction industry. After seeing the problems of our fellow Pennsylvanians in Clearfield County with the well accident and the polluted water supply in Susquehanna County, we know how important it is for us to make sure this industry grows responsibly. The recent actions taken by the state house are an excellent step in that direction.
With questions or for more information on my view on the Natural Gas extraction, please give us a call at 570-592-4766.


The have been reports of cows drinking frack water so by popular demand I will repost this pic of Boback discussing dairy and water issues with a constituent. 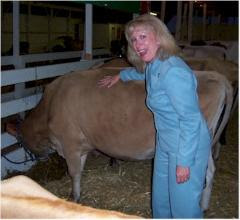 Wait, why are we giving the EPA money? what a horrible idea. Invest locally in your community. I spoke with many leaders of the industry and believe me there are ways to safely extract the natural gas. Also, giving money to the EPA so that they can engage in rent seeking activities is absolutely hysterical. I mean open your eyes Mr. Shermanski, look up your facts the EPA has not introduced a new policy within the last 8 years. Historically, the EPA has implemented POLITICALLY feasible policies not Economic ones. The EPA often does not approach local issues as it does issues that have a national effect. I would rather see this money go back into NEPA rather then give this money to the EPA. I don't see the EPA doing much other then getting new furniture and bigger offices, with this money. Both candidates should do themselves a favor and go back to school and get another science, business, or engineering degree, instead of relying on their useless liberal arts degrees. Nothing upsets me more when candidates and politicians who nothing about business, or science try to push policies. What clowns

"there are ways to safely extract the natural gas." Well if there are, they're not the ones they want to use in Luzerne County. In 1970, if you asked a person from the tobacco industry if smoking was bad for your health, he'd say "No way!" and give you a pack of smokes and a light.
Did you look up the facts on Fracking or do you just beleive everything they tell you?

Karen Boback has been there too Frackin' long! I'll be glad to vote to send her back to Harvey's Lake. Maybe when the lake gets poisoned with the fracking solution and the natural gas deposits and she can light her water on fire she'll think "Hmm... maybe I should have voted for that severance tax and supported a moratorium bill that could actually pass (instead of putting mine in as one of like 13) after all!"

Does Shermanski have a shot? Who knows! But I would love to send K-Bo packing.

Just say no to Karen Boback. She represents big bucks and proved it again when she recommened Wil the Dairy Millionare to complete the Clerk of Courts seat. Money goes to money even when it crosses Party lines. What the hell is wrong with Musto allowing Boback to make such a move. Musto should be asking for the Senate to sit on the noication as he has the right to do.

R these the best two people they could find to run she looks like she is high on fracking stuff.