We had uneventful trip to and from San Diego connecting in Chicago. I haven't flown in a long time and was expecting all sorts of hassles going through security but it wasn't bad if sometimes silly. Taking off my shoes and the 3 oz. liquid thing reminded me of the old saying "The Generals are always fighting the last war."

We flew Ameican Airlines there and back and all flights were either on time or landed early. We departed Avoca on a Braziilian made Embraer ERJ 145 that is a bit of a rough ride that had Mrs G's palms sweating. There was a 3 hour layover so we had a great lunch at Romano's Macaroni Grill. It was the best airport restaurant meal I have ever had and not expensive.

The 2nd leg was on a Boeing 737 which was more to our liking, the bigger the airplane the better the ride. My favs are the old Lockhead L1011, the 747 and the C-5 military plane. The C-5 is a comfortable if noisy ride.

The rental car company shuttle bus picked us up and we got a Suzuki SUV that had confusing controls and a GPS that had brain damage but we found our hotel. Returning the car the GPS was out of whack so I made about 14 wrong turns but eventually found the lot. I don't own a GPS or many of the other latest gadgets but I liked this thing although it is a threat to my ability to bore people with tales of my map reading skills. It was also in love with highways that for the most part I prefer to avoid.

On the way back we had curbside check-in with a gentleman that obviously enjoyed his job, he had a joke for every situation much like me. The trip back to the east coast took much less time because of the tail wind. We had a shorter time window in O'Hare this time and had to find the gate then grab some food. Mrs. G and her Mom were smart and went to McDonalds while I tried Burito Beach at the food court near the H gates. That was a mistake. It was an assembly line operation like Subway and the end product was uneatable and after a few bites I threw it in the trash. To complete the experience the people who built my burrito were very rude and it cost me almost 10 bucks for all this fun.

We left Chicago on another puddle jumper with jet engines that had a smooth ride in to Avoca. 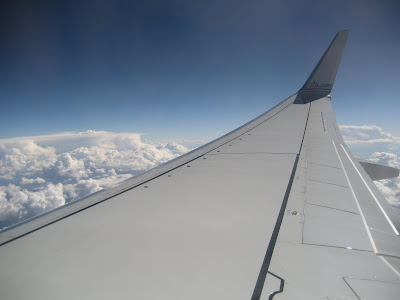 (Photo by Gort) No copyright bullshit. Steal it you want just link back. More pics from the window at this link.
Posted by Gort at 1:26 AM

This photo was in Life Magazine, sorry to tell you.

I'm sure I'm not the first person to take a snapshot of the wing while in flight. This pic was taken yesterday somewhere over the western US.

Just came back from a trip myself. If you are under 6 ft tall, these regional jets are ok. 6 ft + - They suck. You get shoe-horned into the seat, and if you need to use the Lav..... Forget it. I feel sorry for the people that have to sit across from it in that last row. My fav was the L1011 too- All are now in mothballs.....