To get along, go along

"I'm not going to fight him out in the press about this. He hasn't been a board member very long. He needs to come to some meetings to learn what the process and procedures are. He's just been very disruptive. He's doing what he wants to do when he wants to do it."- Luzerne County Convention Center Authority Board Chair Donna Cupinski


I had a bad feeling when I heard that local hooligan Alex Milanes had been appointed to the Arena Board. Alex doesn't always play well in the sand box and is working on a follow up to the Dale Carnegie  classic with the working title of How to Lose Friends & Piss Off People. He is the kind of guy that makes you feel good about being constipated. His entertainment experience consists of working as bouncer at one of those safe downtown W-B bars. Hell, I've been thrown out of places like that by people like him so maybe they should put me on the board.  Maybe he can use his connections to bring in some unique acts  such as a one legged tap dancer or a ventriloquist that stutters.

At his first board meeting last week Alex endeared himself to the other members by objecting to the free lunch that was served. I think he was just disappointed that corn dogs were not on the menu.  Cupinski said it was no big deal as she said the sandwiches only cost a buck.

That led to an exchange of emails that a 3rd party was good enough to forward to me.

Alex asked for all receipts  for catering and the authority to pay for it. Donna shot back that it would take 3 days to put that together and told him he can't go into the place unless he has an appointment, tickets or a meeting. She then accused him of  wanting special treatment for tickets to the Luke Bryan show. He explained that he actually wanted to exchange his floor seats for less expensive side seats so his son could see the stage.

Cupinski also told him not to bring in cookies for the staff. I'm not sure about that one but she might be concerned that Milanes got his cookie recipe from Casey Evans and gay dope might be baked into them.

She is just as charmed by him as I as am

That is enough!  I have checked my facts and know what is true. You have  been nothing but disruptive since you have been appointed to the board and  I will not stand for it. We are doing GREAT things at the arena and I will  not have you paint the staff, the board or me as doing otherwise. I also  will not fight this out in the press or before county council.

Maybe he should get a suit that fits. 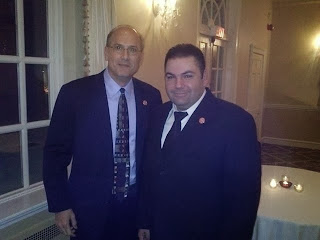 So much for not fighting it out in public . . . you g'd troublemaker.

I bet the staff make GREAT lunches. Only a matter of time before Milanes grabs Cupinski by the back of the neck and throws her out of the arena like he did to the drunk trouble makers at the downtown bar. I would by a ticket for that. Dont let Milanes fool you, Cupinski is just keeping his chair seat warm.

Just wanted to say happy thanksgiving to everyone smoking my patented gay dope at 4:20 today! :)

Remember, make like the Pilgrims and try the turkey!... but, just an FYI, you may want to avoid the "free blankets"... just a tip!