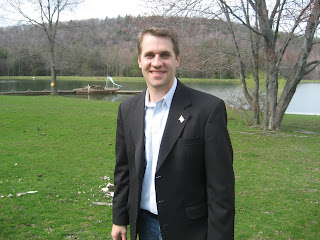 if anyone is gonna sit behind a desk in the controllers from 8:30 to 5:00 for $36K, they probably don't have a life, and certainly wont get my vote. and if they shut down their business for the job, they cant be that good of a businessman.

"The reason why I didn’t go public was this. I knew the corruption that was going on in the courthouse and if I went there and said listen, this is what I’m seeing, I know that would have done to me."
Just what we need in the Courthouse another guy that is afraid to speak up for the taxpayers. This guy is clueless on the response to the interview and the needs of the taxpayers.

Look at all the people that rallied against the assessment. Where did it get them. This guy knew enough not to go to the same corrupt politicans and tell them what he was seeing and you call him clueless, afraid to speak up for the taxpayers. Like Bob said he lowered thousands of TAXPAYERS taxes in 4 months. What do you have to say for yourself. What he did spoke LOUDER than any commissioners has ever done for me. The fact that he was willing to put his two businesses aside to help the situation speaks about his leasdership in a time when we need the most.

Anon 7:08 - You are an absolute, total fool...a complete idiot. Love Bob, or hate Bob, you have a scary philosophy when it comes to service to our nation. How did we go from a nation of Founding Fathers who pledged their "life, fortune and sacred honor" to someone as self centered as you? Think about what you are saying and how shallow you are. You will not vote for a person who commits to working fulltime for the county because he doesn't demand enough money? You are a total fool and it is your type of self-centered philosophy that is tearing down America.

Anon 11:56 - Well said! He's most likely a Nanda guy. Did you notice the "they probably don't have a life" line? That is straight from the Nanda playbook. So let's see if I've got this right: if someone is willing to actually serve our nation by taking a position that pays 36k, you don't have a life and don't deserve a vote. Wow!

Hey 1156 & 1204 - I'm an idiot? call me whatever you want. I couldn't care less. This is 2009, not 1950. If you're still making 35K a year, your are the idiot. In fact, if you're not making at least 2X that by now, most likely your a fat lazy slob who hangs out at Walmart and bolwing allies. Nanda was absolutely right and shouldn't have apologized: People who still only make 36,000 a year do not have a life. I am voting for Nanda because he is the only one in the race with money. And he was also right when he pointed out that people with money are much less likely to be tempted by money than you poor Walmart Republicans. That only makes sense. So take that and eat it you lazy no life's.

Gort -
Thanks for a great interview. I've not heard anything about this guy. I look forward to the future interviews as well with the other candidates.
Question: are you sure he said (or meant to say) that one of his qualifications was that he was a business major in HIGH SCHOOL? I'm guessing he meant to say college, since you don't have a major in high school. Plus, I don't that most candidates would be putting their high school classes out there as a qualification for election. My guess is that he was a business major in college?

He never graduated with a 4-year degree. Gort got it right: Bob MAJORED in high school in business. That surely qualifies him, doesn't it?

He didn't speak up about corruption he knew about because he'd be replaced? WTF? Is that what we need? another spineless row officer?

I don't think you have much of a brain to understand that Bob was humoring us. That in high school they taught you this quote "It’s pretty easy, when your debits out weigh your credits you have a problem." I sure thought you would have been able to understand this. I would love to see any of you jackasses take the courage that this young man is willing to take. Sometimes money is not what modivates people like Bob. You all sit there blog these comments and don't have the courage to put your name next to your comments

Anonymous 8:46 sound alot like one of the candidates. Very angry becasue when Haggerty and Mesuer brought him to Casey they told him this would be an easy victory. This goes to show how selfesh he really is and his thoughts about people that have not been awarded mega bucks from lawsuits.

I like Bob, but I wish he had a better answer to the number of terms he'd serve - something like: The Courthouse is a mess and it will take time to clean up. My plan calls for having a complete review of procedures done within 6 months, new processes with checks and balances in place at the end of my first year. I will have the financial elements of the Courthouse running like a Swiss watch within two years. I plan on serving a second terms to be sure my improved processes will be ingrained and replace the current culture of corruption.

After 8 years of service to our community, I hope and expect the voters of NEPA will see what I've accomplished and support me if I decide to run for other political office or return to the public sector confident I've contributed to our community in a meaningful way.

Bob Sypniewski said:
"I’m the only candidate that has shown that I can work for the county, work for the taxpayers and then do my life second. I’m done it before, give me 4 years so I can prove it."
We see how you worked for the taxpayers by not speaking to the press about the corruption in the Assessors Office right? Looks like you were working for the County only for a paycheck just like the rest of the "do nothing" people in the courthouse. So if you lowered assessments for some of the people Bob and didnt speak about the corruption, does that mean you were just as bad as the people we hired to do the assessement? How did you get the appointment to the Assessement Board, should we check with Steve Urban, and also the fact that your father is a retired Wilkes-Barre Policeman? and you have no political ties? I think this interview was very enlightening.

This guy is a total coward and not very intelligent! If he was afraid to speak up, out of fear of being fired, well he could have gone to the FBI and I highly recommend he do it NOW while they are still investigating corruption here!
He also could have spoken up when the job ended in December (while there was still time to stop this
corrupted reassessment). No, not
even then did he speak up, after his $100 a day plus mileage job was over! He waited months more, when he was running for office and tried to capitalize on the situation, while he actually did NOTHING to help the taxpayers! We
have such deep and rampant corruption in our county because people sit by in silence. We need someone with some backbone.
And this blogger who thinks only
lower income people can be tempted by bribes and kickbacks ought to take a long hard look at the folks going down in this corruption scandal! Start with the Judges who earn $150,000 plus a year; the
Court Administrator @ $90,000 a year, and on and on. Look at the people taking and giving the bribes, as they are all very wealthy people; NOT low income people! Whoever wrote that is VERY naive! Look at the big shot bankers and the Wall Street bigwigs who have destroyed the economy--the wealthiest of the wealthiest in this country took it to the ground with their greed and
corruption. You have it all wrong!
This Bob guy disgusts me with his total BS, and that is all it is, BS! His lack of courage will make for yet another controller held under the gun by the higher up power mongers in this county (and most of them are not holding elected office, they are holding our elected officials in the palms of their hands!)

Who said there was corruption in the Assessor's office? I did not read that in this interview. First let me start off by saying, you must me a candidate (Nanda or Walter) you question why he was asked to work on the board and not you. The both of you disgust me, you both try to get your name in the paper or on the news for personal satisfaction or political reasons. You are hitting some all time lows when you take a jab at the W-B Police Dept as being connected to the corruption. I happen to know bob and I know this, his father died 3 years ago and for either one you to make an insult like that speaks volumes about how you are as a person. Hide all you want under your anonymous blogging, this was really low.

When I saw the comments that asseserted that his dad a w-b policer was tied to or connected to this corrupt county,this was low. This is a slap in the face to the w-b police dept. My father was a police officer alongside Bob's dad. My father served 33 years and his dad served 40 years. To make a comment that w-b police are connected and corrupt!!! You did not know the police of that time. I want to share somethings with you about sypper's dad that you may not know because of your ignorance, his father was hired in 1957 as a partrolman and he retired in 1997 as a patrolman as did my dad. Never once taking on a increase in rank, he was one of the few to ever wear the #1 badge as a partolman, most are of a higher rank. Our dads retired in 1997 and his dad was not as lucky as my did was, his dad had a massive stroke that left him in a vegatable stage the rest of his life until he passed away 3 years ago. You are a coward and scum to make that kind of assesertaion. If you only knew his dad. One of his children finally stands up an runs for controller and one of his first insults is " His father is connected." That is sad. Syp I wish you the best of luck, I know the FOP Lodge 36 stands by the legacy that your dad left behind. He is truly missed. As for these comments, there is no place in politics for this.