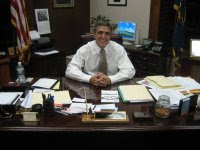 Hazleton Mayor Lou Barletta Paid for a poll to test his name ID in a possible run for Pennsylvania Lt. Governor next year. It's not surprising that he is best known of all the possible contenders in the GOP primary and has a high favorable rating among likely Republican primary voters.


I sat down with Mayor Lou a few months ago but never actually posted about it because of some technical issues like my recorder batteries went dead and I accidentaly deleted the word document that I wrote up afterward. Looking over my notes from that meeting I can say that the guy loves being the Mayor of Hazleton. He hit me with charts and graphs detailing some of the improvement projects that in the works for the mountain city such as a new transportation center and an amphlitheater to be built on an abandoned strip mine. He defended the use of Delaware River sludge that is filling the old coal pitts saying every load is tested for safety. He contends that Immigration ordinance would be appealed to the US Supreme Court if the 3rd circuit rules against the the city and will fight the attorney fees awarded by Judge Munley. He rejected the charge that he is a racist pointing out that he performed several hundred weddings since the ordinance was passed and 80% of them were of Hispanic couples and 55 new businesses have opened since then with many of them having hispanic owners. Lou is expecting his first grandchild soon and the father is hispanic. Barletta said there is no great divide in Hazleton and took some shots at "self appointed" hispanic leaders.

His answer to Mark's question was interesting.

Why would you agree to be interviewed by a blogger who did everything he could to keep you from winning a congressional seat?

His Answer: Why not? You won't know what I'm about unless you get to know me.

So much for the contention that blogs are anathema to the great majority of the elected, as well as almost all of the hopefuls?

I will be interviewing various candidates for the county row offices in the next few weeks.

Barletta said the only person possibly more surprised that he didn't win the US House race was Paul Kanjorski. His internal polling had him leading the whole way.

As far a race for Lt. Governor goes I think it is a natural fit because he would win the primary easily. He has ambitions to be Governor but I don't think he can beat Attorney General Tom Corbitt for the nomination this time out.
Posted by Gort at 5:31 PM

Lou was considered very Hispanic Freindsly befroe the whole ban went down and the bill had the support of some Hispanic leaders, i know one turned on him

didn't someone write a column prior to the last elections stating Mayor Lou was better suited for Lt. Gov. than congress??

Being Lt. Governor in Pennsylvania ain't worth a bucket of spit. As far as I know, the only one in recent history to become Guv was Mark Schweiker who got it via Ridge's resignation. Most of the Lt.'s (Kline, Scranton, Singel) get their party's nod for the top job, but all have lost and faded into obscurity. I would advise Lou to go for broke and run for the top spot. Then again, if he can't win a congressional election how can he be expected to win statewide? Still, he should go all out one more time and give it a try.

A little history lesson. Kanjorski ran 3 times and lost before winning his seat on the fourth try. He lost to Ray Musto, James Nellingan, and Frank Harrison. I don't buy the notion that Lou "can't" win a Congressional seat. Kanjo is doing everything he can to resurrect his tarnished image. Most intelligent people won't buy it.

Everybody keeps saying the gang problem is exaggerated by Hazleton government. Why doesn't someone ask Chris how he feels? I already know the answer.

The Easter season is fitting for this discussion. It appears people want to be Thomas who must touch the wounds of Jesus before he believes. Many appear to only believe if they hear it from Chris. So have at it.

In today's news there was a gang related shooting in Hazleton. I guess that is a false story too.

PLEASE. He runs the city of Hazleton, not Philly.

The man doesn't have a college degree and sounds like an idiot.

Of course, these ingredients make for a perfect LG--he'd only have to show up for events and have zero involvement in crafting policy.

I hope he does run. I'd love an opportunity to vote against him again.

As far as losing against Kanjo, Barletta's people were totally invisible in Lackawanna County on election day. That is completely true as I travelled to dozens of polling places checking numbers.

I heard that he was told by his 'people' that he was covered but it was an intentional sabotage.

He should have taken Lackawanna County since up here we were ousting as many incumbents as we could.