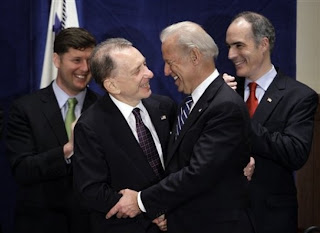 Statement by Senator Arlen Specter
I have been a Republican since 1966. I have been working extremely hard for the Party, for its candidates and for the ideals of a Republican Party whose tent is big enough to welcome diverse points of view. While I have been comfortable being a Republican, my Party has not defined who I am. I have taken each issue one at a time and have exercised independent judgment to do what I thought was best for Pennsylvania and the nation.
.Since my election in 1980, as part of the Reagan Big Tent, the Republican Party has moved far to the right. Last year, more than 200,000 Republicans in Pennsylvania changed their registration to become Democrats. I now find my political philosophy more in line with Democrats than Republicans.
.
When I supported the stimulus package, I knew that it would not be popular with the Republican Party. But, I saw the stimulus as necessary to lessen the risk of a far more serious recession than we are now experiencing.
.
Since then, I have traveled the State, talked to Republican leaders and office-holders and my supporters and I have carefully examined public opinion. It has become clear to me that the stimulus vote caused a schism which makes our differences irreconcilable. On this state of the record, I am unwilling to have my twenty-nine year Senate record judged by the Pennsylvania Republican primary electorate. I have not represented the Republican Party. I have represented the people of Pennsylvania.
.
I have decided to run for re-election in 2010 in the Democratic primary.
.
I am ready, willing and anxious to take on all comers and have my candidacy for re-election determined in a general election.
.
I deeply regret that I will be disappointing many friends and supporters. I can understand their disappointment. I am also disappointed that so many in the Party I have worked for for more than four decades do not want me to be their candidate. It is very painful on both sides. I thank especially Senators McConnell and Cornyn for their forbearance.
.
I am not making this decision because there are no important and interesting opportunities outside the Senate. I take on this complicated run for re-election because I am deeply concerned about the future of our country and I believe I have a significant contribution to make on many of the key issues of the day, especially medical research. NIH funding has saved or lengthened thousands of lives, including mine, and much more needs to be done. And my seniority is very important to continue to bring important projects vital to Pennsylvania's economy.
.
I am taking this action now because there are fewer than thirteen months to the 2010 Pennsylvania Primary and there is much to be done in preparation for that election. Upon request, I will return campaign contributions contributed during this cycle.
.
While each member of the Senate caucuses with his Party, what each of us hopes to accomplish is distinct from his party affiliation. The American people do not care which Party solves the problems confronting our nation. And no Senator, no matter how loyal he is to his Party, should or would put party loyalty above his duty to the state and nation.
.
My change in party affiliation does not mean that I will be a party-line voter any more for the Democrats that I have been for the Republicans. Unlike Senator Jeffords' switch which changed party control, I will not be an automatic 60th vote for cloture. For example, my position on Employees Free Choice (Card Check) will not change.
.
Whatever my party affiliation, I will continue to be guided by President Kennedy's statement that sometimes Party asks too much. When it does, I will continue my independent voting and follow my conscience on what I think is best for Pennsylvania and America.

I am sure you all who are liberal leaning are glad Specter has changed, but as a Republican who has liked Specter, voted for him, gotten to know him on a casual basis and worked on two of his campaigns he has stuck a knife through my heart and those of us republicans who took a lot of shit for being on his side. When asked point blank by or local talking idiot Kevin Lynn he stated there was nothing that would make him change parties. Arlen Specter is nothing more than a filthy liar, who is not doing this for philosophical reasons, if that were genuine he would have switched parties long ago, but purely political gain I have a sense of betrayal that I can not put into words. I used harsh words on another blog, but I can't use them again. If Specter has a challenge in the Dem primary I will do something I have never done in my life. I will switch parties, give of my considerable wealth and work on his oppositions campaign. Every and anything to defeat this Judas.

great photo, is that from the receding hair club for men?

The seat would have gone Democratic regardless; Pat Toomey is in the Steven Friend wing of the Pennsylvania GOP...far too socially conservative to appeal to voters outside of the PA Bible Belt (and certain section of Northern PA)...and it's pretty clear that Specter wasn't going to beat Toomey in the Primary. Like it or not, Pennsylvania is not that conservative of a state...if it was, Rick Santorum would still be in the US Senate.

The "liberal" (wink wink) Corbett is having a shit-fit! He should have "Operation Turndown II", remember how that worked out for him? He should get all the PUMA's together for a reunion.

Since last summer the GOP message has been that Obama, despite his widespread popularity, is some kind of radical Manchurian ideologue, far from the American mainstream. That message just got trumped once again. The poster-child for moderate Republicans has joined Team Socialism. This solidifies the narrative that the GOP is a party in steep decline and that the recent radicalism is serving to regionalize its significance. Specter wasn't going to survive his own primary but now stands a great chance of getting re-elected. If a bitter old conservative dude like Specter can't make it in today's GOP then all bets are off. The long term vitality of the party, as we've known it for decades, is in serious doubt.

Steve Corbett claimed Specter switched because of his (Corbett's) influence. OF course, this was tongue in cheek. People need to see that COrbett is an entertainer and whatever his true political beliefs are we shall never know. His goal is high ratings and you can't accomplish that without pissing off a lot of people. He is succeeding. As far as Arlen's switch, the 60 vote unstoppable majority is a myth. There are several centrist/conservative Democratic senators who cannot always be counted on to provide support for mainstream party issues. Specter is now one of them.

To all my Republican friends out there: YOU CAN'T HAVE IT BOTH WAYS. EITHER YOU ARE HAPPY TO BE RID OF SPECTER OR YOU ARE OUTRAGED THAT HE LEFT THE PARTY. YOU CAN'T HAVE IT BOTH WAYS. WE WILL ALSO BE HAPPY TO TAKE JOHN MCCAIN, OLYMPIA SNOWE, SUSAN COLLINS AND WILL WELCOME BACK JOE LIEBERMAN WITH OPEN ARMS. AS LONG AS YOU KEEP LISTENING TO GUYS LIKE RUSH LIMBAUGH AND MICHAEL SAVAGE YOUR PARTY WILL CONTINUE TO FAIL UNTIL WE ONLY HAVE A ONE PARTY SYSTEM, AND THAT WILL NOT BE GOOD FOR OUR COUNTRY. THE REPUBLICAN PARTY BETTER BE MORE ACCEPTING TO MODERATE VIEWS.