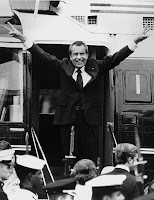 A few days ago Gort42 passed the 4 year mark. One of my first posts was about the Phillies losing again and then they surprised me by winning the World Series in 2008. Now it's back to normal despite the sweep of the Marlins.
.
It's been quite a ride and the great thing about this adventure is the friends I've made. I've met some of you but for most part this is the only contact that we will ever have.
.
My earliest political memory is of Hubert Humphrey leaning out the window of his car on his way to the airport after a rally on Public Square in Wilkes-Barre in 1968 and saying "Hi Kids." I had a slingshot in my hands and was thinking of dinging his car but I was too chicken to do it. If I did something like that a year ago I would have ended up in shackles and sent up the river by the Juvie Brothers. Ca-ching. I have been a political junkie ever since.
.
Gort42 occasionally has come up with some breaking news but like most political bloggers I rely on the reporters that work for the local newspapers for most of my material. We are lucky to have 2 papers in the area that compete with each other and have reporters that do such great work. I'm worried by the financial failure of newspapers across the county. As much as bloggers on both sides bitch about the MSM we really can't live without them.
.
It's impossible to predict the future but I hope to be writing about politics in the next four years on this platform or something similar. Career and family pressures take up an increasing amount of my time and I've come close to pulling the plug on a few occasions. This is the best hobby I have ever had. I used to play golf but wasn't any good at it, the last time they they figured my handicap I got special parking.
.
In the interest of historical accuracy I will reprint my very first post below:
.
Hello
Is this working.
.
Leave me a note.
Posted by Gort at 2:06 AM

I wonder whatever happened to Brig. Gen. Jack D. Ripper.

Best of luck in the coming year. You are an inspiration to the few of us left doing this.