Bank of America $5 debit card fee is a good thing


First, the Occupy Wall Street protest that has been going on might get the attention from the TV networks and other mainstream media outlets that it deserves. From the coverage I've seen so far they are depicted as anarchists that deserved to be viciously attacked by the NYC police.


The reaction from BoA customers online crashed the company's website.


Bank of America “struck the third rail on this one,’’ said Joe Bartolotta, a spokesman for Eastern Bank, based in Boston. “We think it will be an opportunity to attract new customers. People are fed up with fees.’’


My advice to BoA and other big bank customers is to join a credit union. I didn't even know what a credit was until I joined the Air Force and have been a member of one ever since. The rules for joining have been liberalized over the years thanks in part to former Congressman Paul Kanjorski's efforts. We have been members of the Cross Valley Federal Credit Union for years with no fees on our accounts. Even when I screw up the math in my checking account and overdraw it they just transfer money from savings and charge a $2 fee not $35 that the big banks hit you with.


One of my favorite economics bloggers, Kevin Drum, explains why this is good thing:


Bank Fees Finally Out in the Open


Unfortunately, it's hard to explain why this is, nonetheless, a good thing. But here's the nickel version: the old fees were largely hidden. The new ones aren't. Overdraft fees were deliberately designed to be unpredictable, unforeseen, and primarily aimed at low-income users. Swipe fees were invisible because the credit card industry is effectively a duopoly and prohibits merchants from adding swipe fees to credit card bills. After all, if they did that, consumers might actually see what they were really paying for the privilege of using credit and debit cards.

So yes: the new fees are annoying. But that's a feature, not a bug, because now they're right up front in black and white, which means that consumers will see them and can be properly outraged (or not) by them. This in turn means that the free market has a chance to actually work: consumers will abandon Bank of America if their fees are too high and force them to charge less. Likewise, other banks will compete openly on the size of their fees. In the end, this competition will force fees down to the lowest possible profitable level, which is exactly what competition is supposed to. 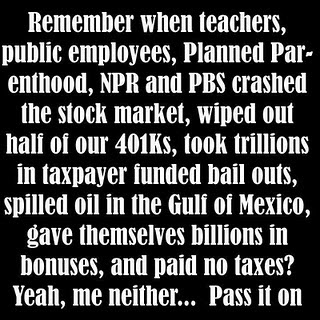 This is nothing new. The banks are going the way of Airline bag fees. Just takes one bank NOT to charge to move the wave the other way.

I also belong to credit unions, in fact two. I have a real roblem with them and that is that they have lost their focus and true purpose. Every time I pass the VA Credit Union on my way to the Mall I cringe when I see how muc money they spent on that building. These credit unions should be operating out of a match box. Their original purpose was to pay members a better rate on their deposits and to len money at a lower rate than banks. Today, in many cases, the banks are easier and better to deal with. Yes, credit union have losts their way and I am no longer a supporter of them.

7:19, I agree 100%. I got a better loan rate for my car from the daler and a better mortgage rate from Wachovia.

It's true just like any other business banks have a right to make a profit. If you listen to the guy who says we need to go back to smaller banks guess what that would turn that bank into a larger bank wouldn't it, how can you move ahead if you go backwards. Nice try buddy. Will I continue using banks, well of course we all do unless you plan on asking your employer to pay you in cash and stuff it in your mattress. Our most important thing in our lives is our financials and to keep that in order I will pay for those services. 5 dollars get over it, I don't see you canceling your 50 dollar cable bill if your so pinched for cash.