I like to use the headlines for this feature

Sarah Palin not Running for President

Expect the GOP candidates to make a trek to Wasilla to kiss her ring and ask for an endorsement. It's already started

Her explanation is, as usual, opaque. But the idea that this person is protecting her family - after putting them all on a reality show, after deploying an infant with Down Syndrome as a book-selling prop, after pushing her son into the military, after sending her elderly dad headfirst into a ravine for a reality TV shot, and after using another young daughter as a campaign press bouncer ... well, it's as ludicrous as almost everything she says. I suspect she knows somewhere that the truth about her will eventually come out in full - as it has already in part, culminating with Joe McGinniss' devastating and exhaustively reported book, The Rogue. And the sheer craziness of this clinically disturbed person would bring it all crashing down. So she's bowing out. Call it cowardice; call it a rare example of sanity; call it a bizarre end to an even weirder game of hide and seek for the past few months. But the bottom line is: we can stop worrying about the threat she posed to this country. That is all I really cared about: the insane gamble with the world that John McCain foisted on us, with no vetting and no reason but desperation and cynicism. 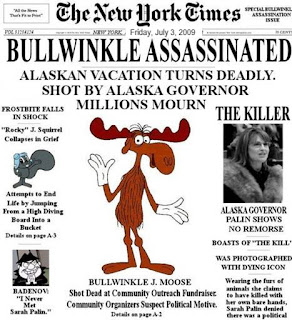 Some people actually think that she said "I can see Russia from my house."