Notice that she has her back to New Jersey 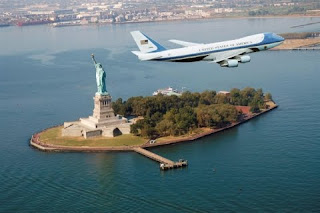 Statue of Liberty at 125

It began with a naturalization ceremony for 125 immigrants from more than 40 countries, who would leave the island as U.S. citizens.

The people of France gave the Statue to the people of the United States 125 years ago in recognition of the friendship established during the American Revolution. Over the years, the Statue of Liberty's symbolism has grown to include freedom and democracy as well as this international friendship.

I'm a grandchild of immigrants as are most of you and this recent hating on recent immigrants disgusts me. This country was built on immigration and I don't mind pressing 1 for English. When I was growing up in the North End of Wilkes-Barre in the 1960's there were mom and pop grocery stores with signs in the window written in Russian and Slovak. But that was OK because they were white. Today there is a place on George Ave in Wilkes-Barre that sells hummas, felafel and other Arabic foods. There are plenty of other places in the area that you can get real Mexican food instead of the junk that Taco Bell sells. As Homer Simpson once observed "if we didn't have immigrants who would play short stop or kick our extra points?"

The New York Times has this great Civil War series DISUNION that I have been reading. I'm struck by how many recent immigrants went to war to defend the Union. Back then there were not many rules to come to America. We welcomed everyone. Today, some want to build a wall with an electrified fence and a moat filled with alligators to keep people out which is better than building one to keep people in like the Soviet's did in Berlin. God Bless America and viva la France.

The original Coming to America video by Neil Diamond that I wanted to use after writing all this is no longer available.

My country tis of thee

Gort, you are out doing yourself. Great job on the last two posts. I'm beginning to think there is a book lurking between your ears...... let it out.

I don't know about a book. I'm just trying to push back against the hate and bullshit.

My great grandmother immigrated to the U.S. from Poland and til the day she died she never spoke a word of english. I sure am glad she wasn't kicked out of the country because then I probably wouldn't be here today. Like you said Gort, most of us are all descendents of immigrants, including those those who now demand that we build a giant fence along our southern border. How quickly they forget.

The statue is made of Bronze, but long exposure to the elements has resulted in the weathered, greenish-gray appearance it now has. The statue was finished in 1883 and on July 4, 1884 was presented as a gift to the united states. The statue was brought to Bedloe's Island in June of 1885, and assembled in 1886, and public unveiling was held on Oct 28, 1886.