From the Borowitz Report


Millions of Americans cheered the news on Friday that arrests had finally been made on Wall Street, but were soon disappointed to learn that the wrong people had been taken into custody.....


At banking giant Goldman Sachs, chairman Lloyd Blankfein admitted that when he heard police sirens outside his building, “I was sure they were finally coming for us.”


A Letter from Goldman Sachs


As thousands have gathered in Lower Manhattan, passionately expressing their deep discontent with the status quo, we have taken note of these protests. And we have asked ourselves this question:


How can we make money off them?


The answer is the newly launched Goldman Sachs Global Rage Fund, whose investment objective is to monetize the Occupy Wall Street protests as they spread around the world...


The Rage Fund will seek out opportunities to invest in products that are poised to benefit from the spreading protests, from police batons and barricades to stun guns and forehead bandages. Furthermore, as clashes between police and protesters turn ever more violent, we are making significant bets on companies that manufacture replacements for broken windows and overturned cars, as well as the raw materials necessary for the construction and incineration of effigies. 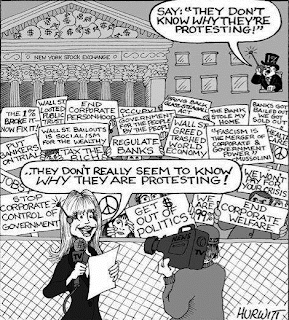 This is the best post ever. I love it.