Incredible. Admitted criminal former Luzerne County Clerk of Courts Bob Reilly formed a company called Tri-State Chemical March 21, 2011 that was awarded a county contract to provide cleaning supplies valued at $6500 on August 23, 2011. Reilly plead guilty to lying to a FBI agent and was sentenced to probation November 4, 2010. He was originally charged with accepting a bribe from Barton Weidlich but cut a deal with the feds.

Controller Walter Griffith discovered the ownership of the company and has asked the Commissioners to cancel the contract and put it on a no bid list. Various lawyers quoted in the media are not sure if that is possible and Commissioner Chair Maryanne Petrilla points out that the county contracts with thousands of companies. The challenge is to develop a vetting process to prevent this type of thing from happening again if possible. Reilly's lawyer argues that the guy has to make a living.

You have to wonder what this guy is thinking by putting in a bid for county business after disgracing himself. As Michelle Bachman would say, he has a lot of choot-spa. 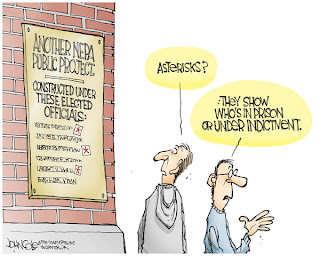 Going after Bob Reilly for $6000.00 is such a waste of time !!!!When the Tax Claim Deparment is being run BY ATTORNEY JOHN ROGGERS for $1 MIL. a yr.! Now he is paying $8.00 hr. and NO beafits so he will make more money ! all the county employees that got lade of so Roggers can make more money !!!COME ON FEDS THKE A LOOK !!!!!!

It's Petrilla the Feds should be looking at. All that did was to destroy the financial lives of long term employees but for many without a heart, that's wonderful!

What the hell is Walter Griffith think? On what basis does he think he throw out legitimate bids? Is Reilly not entitled to earn a living? I agree, going after a county contract shows ballz of brass but beyond that, how does Captain Griffith figure he can throw the bids out , especially when he has nothing to do with awarding them? Walter really is a little too much and I have to wonder if he is doing his real job? When someone makes so much smoke about little things, I have to wonder if that to hide the big things that he doesn't do? I read a few comments a while back asking why Griffith has not advised the public where he stands with updating the county audits. Audits as I understand the job is what he is supposed to do and when he campaigned for the job, he made a real issue about what wasn't done. Should I mention that he fired his Assistant and hired a person who he said on the radio he had promised a job if one opened. He said the fired guy was doing a job but he made her a promise. Now please explain how that is any different than what he has raised hell with other politicians about? Walter proves that when they get there, they do exactly what they shoot at others for doing. I sure hope that someone runs against his phony ass next year.