Holiday greetings from the mean one

From the backwoods of Luzerne County I received this message of peace.

I want to thank the Commie Gort for allowing me to write about our most sacred holiday commemorating the birth of our savior, the Lord Jesus Christ—not that the majority of Reds who read this rag even care or know who Jesus is!! I’m angrier than Donald Trump at a Rosie O’Donnell pig roast over the way the Commies have taken Jesus out of Christmas and replaced him with the subversive figure called Santa Claus!!!
Back in my day when my old man would get home from a fifteen hour day in the mines you were lucky to have a piece of cardboard to fill in the holes in your shoes—and it was great!! One day around Christmastime my old man was sitting on his trusty hard wood chair (not the prissy lazy boys that you have today) and I asked him about Santa. All the other kids at school were talking ‘bout how Santa was going to give them a sled, a fishing pole, a dog or something great like that; all I wanted was a baseball glove. So I asked Dad if he would help me write a letter to Santa and he told me that Santa was made up by the Commies and the Jews to take attention away from Jesus—and that if I ever mentioned the name Santa in our house again that he would give me a shiner for Christmas!!! To top it all off he popped me one in the left eye for good measure—and I loved it!!!!
And then there’s the toy of the year; yeah, we all know that one. The Commies started that one in the early eighties with the Cabbage Patch dolls. Every sucker had to have one so they started rioting all over the country---the ol’ Commie trick of divide and conquer! DAMN!!!! The other day my Soviet admiring son Chip asked me and Thelma Jean to wait in a line at Best Buy to pick up a Wii computer gizmo—after I asked him what the Hell a Wii was and he explained, I still didn’t get it—I ended up telling Joe Stalin Jr. that if he wanted to get his sissy kid some Bolshevik toy that he had better damned well do it himself!!!! In my day we waited in line at Christmas too—but we waited for food—and you were lucky if you walked away with a couple cans of beans---and you would hold your stomach when you lay in bed hoping that when it growled from hunger that Dad wouldn’t wake up and smack your face—which he usually ended up doing anyway—but I loved it!!!!!!
You kids have it too good today—what with your credit cards and your computer gizmos cell phones and giant TV’s—I still have my old Philco black and white and it was made in the ol’ US of A and it still runs like a top—not like the crap that some six year old makes in Honduras—at least those kids work—not like the little panty wastes in our country.
Well, all you anarchists have a good Christmas—just remember to put your hammer and sickle ornament on top of the tree!! As for me, I’m gonna sit in my trusty wooden chair and admire the Christian angel on top of the CHRISTMAS tree while popping open a Steg, puttin’ some Guy Lombardo Christmas Music on the victrola and waiting for Thelma Jean’s wild goose to come a callin’ me to the kitchen table
May all the Bloggers have a Merry Christmas and a prosperous New Year---do someone a good turn once in a while and remember, I HATE YOU ALL!!!!!!


I've never set foot in the mean one's household out of fear for my safety but somehow Miss Cellania was invited to Christmas dinner at his place last year and sent this pic. 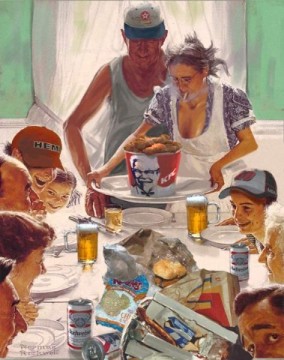 Here are some links to other touching holiday themed stories:

Republicans to ask Jesus to run for President in 2008

The Weekend Before Christmas

Gort, maybe you can set up a blogger meeting at that kitchen table. It certainly would be interesting. I'll bring the Steg if you bring the first aid kit. A Merry Christmas and a Happy New Year to ALL. Bless You.

Mean Old Man sholud be happy I did my part by Dissing Santa.

Gort, I really enjoy that mean old man. I'm going to lump all these essays togther after the holiday on the TrueDems blog and do an online poll to see which was the most touching. God Bless us all, everyone!

Mean Old Man let me salute you! Sure it's a little fanatical but there is a germ of truth in everything you say. I'm a Teddy Kennedy Catholic. Go to church every Sunday....just in case. Give talks at family funerals because they tell me "I talk good!" But Christ in Christmas is a foreign concept. Do we stand in line for hours the day after Thanksgiving at a church? Yep, the church of Walmart, Target and the Mall. Do we even go to church on Thanksgiving? Nope. Hey mean old man, the Commies have got us by the gonads and there's nothing we can do about it. Even me, they got me with those damn Communist Victoria Secret stores!!! Damn them. I'll do my part though mean old man in upholding Christmas tradition. At midnight Mass, I'll stick my cane out and trip the people I see going to communion. Those commie bas***** haven't been inside a church since last year anyway.
Merry Christmas Mean Old Man
We should run you for Commissioner next year!
And Gort, Merry Christmas to you this year too.

The Mean Old Man's coments are very fitting and very Dicken's like. I'm sure the Mean Old Man gets a kick everytime when the ghost of Christmas present says to Scrooge about Tiny Tim dying "If he is to die then let him die, and decrease the world's surplus population". Merry Christmas MOM, and to you Gort the Mrs. and all the family!

mr. gort, I approve this message! Well Done! Too bad O'Hareball can't be this original!

PGR, I'm not going near that lunatic. A few months ago I had to drive by his house going somewhere else when he spotted me. The next thing I know my car is getting hit by a bunch of projectiles putting all sorts of dents in the body. One of them came through the open window in the back and when I looked at it later it appeared to be some sort of petrified food.

Can we say that on this blog?

Rick, You can say anything to want on this blog. Merry Christmas.