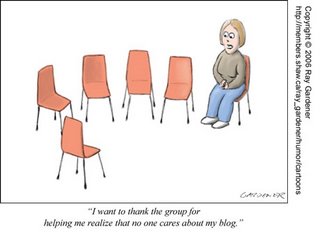 I've been remiss about posting the last few days as lifes obligations have interfered with my computer time. I hope to minimize such interferences in the future. I wasn't going to write about our blogger/OT committee gathering until I read this.

First of all my apologies to my old and new friends about the loud music. The reason I chose Marks is that the place is normally mellow at that time on a Saturday. It's usually a few people watching football who clear out when the DJ starts later in the evening because they don't like all the noise either. I did ask the bartender and the owner several times to turn down the volume but I guess they thought someone putting a dollar in the juke box was more important than a dozen people who wanted to have a conversation. If we do it again I will get us a back room of one of the other watering holes I frequent. Without speakers!

Anyway, it was great to get together and a big thank you to everyone who attended. Overall I had a great time. Spending time with people who have the same interests but different viewpoints is always enlightening. I really enjoyed our conversations about technical issues such as using sitemeter and what you hope to accomplish with a blog. Why do you blog? To tell the truth I'm not even sure other than I want to be part of the conversation. Forget letters to the editor. I was reading blogs for a few years when I decided to start my own. I was a regular commenter on some state and national sites but wanted to provide a forum for my pals to sound off on local issues so I started Gort42.

Anyone with an interest in politics wants to chime in on the big issues of the day but I knew I wasn't going to be the next Atrios or Instapundent. An English teacher I had a long time ago advised me to write about what you know, what you've seen and lived through. So I decided to stick to NEPA politics. My inspiration was Wilkes-Barre Online. He wrote about what a mess W-B was becoming under an incompetent Mayor and brought many people along with him. Chris Lilek was another role model in his relentless assault on Arlen Specter. Above Average Jane taught me discipline in finding a local angle to a national story.

The Saturday OT Committee and Operatic Society was out in force. Regular commenters Pope George Ringo, Rain Man and the Senator from Plains are always a lot of fun. Other participants have write ups. The Pennsylvania Progressive travelled far to join us reliving his roots. Lehigh Valley Commissioner candidate Chris Casey added his humor. The Yonkster helped keep order and Another Monkey came up with an idea.
Posted by Gort at 2:36 AM

I lost my brown bag covering... glad you guys had fun

It would be nice to have gatherings like that on a regular basis. Maybe even traveling to other areas and visiting with those bloggers who were nice enough to come from all over the area; near and far. What do you think?

Cool. I attended Drinking Liberaly in Philadelphia in August and met some of the big state and national bloggers. They were all very generous and interested in hearing from someone outside of their area. If I hear of any gatherings we'll pack a cooler and a laptop and hit the road.