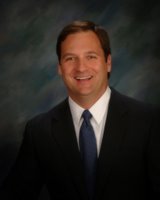 A bit of a disapointment that he didn't get a seat on the House Appropriations Committee as promised bt Jack Murtha. I'm sure Steny Hoyer wasn't about to reward someone who voted for his opponent for Majority Leader. But he thinks he will get it in the future.

CV: “The seat will come to the 10th (Congressional) District when the next slot opens up,” he said. But he’s pleased with his appointment to the Transportation and Infrastructure Committee, his second choice, he said. “I think getting T and I was a huge coup and great for the district,” Mr. Carney, D-Dimock Township, said. Mr. Carney said he is also expecting to be named to either the Armed Services or Homeland Security committees.

Armed Services seems a natural for him. He was also on The Colbert Report. You can see the clip on ifilm: Know a District: In Your Face, Pelosi.

Meanwhile the sharks are circling even bfore he is sworn-in. In addition to Joe Peters, two other republicans are thinking about running in 2008. State Rep. Steven W. Cappelli, the former Williamsport mayor and David Madeira the runner-up in the 20th Senatorial District primary. Madeira is also thought of as a potential Luzerne County commissioner candidate.

Speaking of swearing-in. I received this invitation:

Once again, Thank You for all that you did to support my campaign. In recognition of those efforts I am honored to invite you to join me, my family and my staff for the official swearing in ceremony on January 4th in Washington D.C. This moment truly belongs to all of you so please come and share it with us if you are able.Wishing you and your family a healthy and joyous holiday season and a happy new year!

The last time I was invited to Washington was in 1977 for Jimmy Carter's innauguration. I just might try to make it.

huge differnce, Holden was ina split seat in 92-00, he is now in a republican seate but half the voters knew hima already, Carney should just try to do whatever good he wants to do and forget about reeelction or hope the GOP nominates a loser, But it seem he will just be an Omsbusman like Sherwood.

Holden was gerrymandered out of his district and beat George Gekas, a multi term incumbent.
Carney can hope for a divided Republican primary fight on the GOP side. A Joe Peters candidacy would be formidable since he would have the full support of the Scranton wing of the party.

I like Joe Peters too he is a King's grad, i really like Chris Lilik but i doubt he will run

Joe Peters will probably have the help of Bill Scranton, which will help him in the valley, but will hurt him in country side.