Well the big day has come and gone and I'm late as usual. National Drunk Blogging Day will sure to become an annual event that promises to become bigger as the years pass. 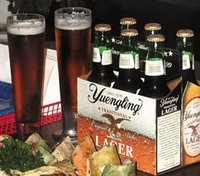 I stopped off at my local pub to get warmed up and brought home Dick Yuengling to help me out in this endeavor.

Now the challenge is what to write about something without it deteriorating into a drunken, suicidal rage involving hookers, inflatable party sheep and power tools with mayonnaise and Kaopectate splattered all over the keyboard at the end.

I think I should cover some things other than local politics.

A friend is trying to quit smoking and violated the first rule, he told people he was giving up smoking. So everytime he backslides and gives into the temptation of the evil weed he is subjected to a torrent of abuse from smokers and nons alike. I encourage him by reminding him that it's easy to quit smoking, I've done it five or six times. I also haven't sniffed glue in years but nobody gives me any credit.

Dental floss is now being sold in round containers. This strikes at the very heart of modern civilization and tradition. I know you get the freebee at the Dentist is in a blue square device but the commercial product is being packaged differently.

I just disturbed the dog and made him come downstairs because of our need for animal company. The cat is hiding under the Christmas tree and is out of reach unless I want to suffer various bleeding wounds then to have him go hide somewhere out of reach.

Note: Blogger will not let me post pictures right now and it's pissing me off. I hope blogger beta doesn't have these problems. I should really move to another platform.

Zip codes. Everybody is talking about zip-codes, I don't know why.

There were a bunch of Bowl Games on today and a bunch more over the weekend and I hope to catch as many as I can. The game I want to see is South Carolina vs. Oregan State. If Carolina wins the headline could be Game 'cocks stick it to the Beavers.

New Years Day has PSU playing Tennessee which has caused much consternation in the Gort household. And the Eagles will wrap it up and win the division on Sunday. They're hot.

Now hairy bats are appearing on the floor. The only way to kill them is to get on the floor with a metal edged ruler and chop the wings off.

Umm...hary bats? On the floor? Are you sure it is just Marlboro's you are smoking?

Just be sure you don't combine Drunk Blogging Day, Blogging in Your Underwear and Friday Cat Blogging at the same time, it could be dangerous. Mrs. Gort wouldn't appreciate the results!

NG, Actually I poison myself with Marlboro Lights.

PA, Now that we have a digital camera I hope to join in the pet blogging. The most photogenic members of the family are the ridiculous retreiver and little fat cat.

No drunk blogging for me, thanks, but enjoy. Gotta cut loose now and then. It's just, well, got some lawsuits on the line, can't blow it now.

Thanks for staying on top of a government that's grown into the ugliest of beasts... looking forward to keeping an eye on the scumbags in 2007.

Have a Peaceful, Safe and Happy New Year.

Did you see my blog edition of the 29th? The Green letter represented Appletinis, the Red Margueritas, the Blue, Curacao, and the yellow or amber color, wait there weren't any of those colors on my blog, shit, how'd this carpet get so wet? Anyway, I finished my drinking, grab a cold piece of pagach out of the fridge and I turn on the TV and then see this guy getting hanged. I hope he wasn't the coach of the NY Giants, that would be too messy even for New Yorkers and the NFL. So I just went to bed and today, am I sick. Go figure. Thanks Marlbourough Man!

I must be drunk, because I'm sure I didn't just read that.

The only way to get over a punctured party sheep is to drown your sorrows in Woolite.