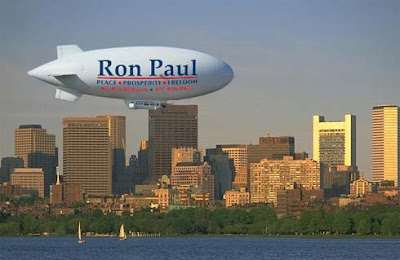 I have feeling this might be a hoax. From the Bostonist:
Republican presidential candidate and Internet sensation Ron Paul doesn't need Oprah. He doesn't need connections to the hot-shot politicians. He just needs a blimp.
Ron Paul's supporters are sending up a blimp for an East Coast tour from North Carolina, through DC and New York, to Boston. According to the flight plan on the Ron Paul Blimp site, the balloon will launch Wednesday in Elizabeth City, North Carolina, and then travels north, flying over Boston, Worcester, and New Hampshire on Friday and Saturday. On Sunday, December 16, the website for the Ron Paul Blimp Tour organizers says the blimp will dump tea into the harbor at 7:00 pm.
If this is true the other candidates will have to respond. Will John McCain take to the air in a F-18 Hornet and try to shoot it down? Guilliani may talk into a hot air balloon until it rises into the sky. Huckabee could resort to a biological airborne weapon generated by eating a couple of burritos and pickled eggs which Romney will respond to with an attack ad saying that he doesn't eat Mexican food. Will someone wake up Fred Thompson and point it out in the sky?
Posted by Gort at 3:22 AM

Looks like a hoax to me. Have you seen A Big Fat Slob's side bar dedicated to Paul? It's useful.

Ron Paul is awesome. He's not going anywhere, but he is nonetheless entertaining.

No hoax. Here's a photo of the blimp in the hangar, with the artwork applied to one side:

Oops, that was supposed to be a link:

The whole Republican field is entertaining for many of the wrong reasons as Slobby pointed out.

Thanks for the update Derrick but me and Robin are going to wait till we see it in the air.