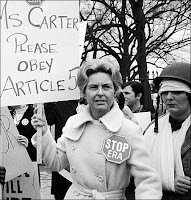 Phyllis Schlafly's single issue interest group has expanded into other areas over the years and Eagle Forum now sounds off on many things. On domestic issues the group is opposed to sex education (unless its “abstinence only”), reproductive rights, AIDS education, sexual harassment legislation, federal support for daycare and family leave.

What is "pro-family" about any of that?

Maybe the thinking is if they tell kids not to have sex and not offer information about contraception that will lead to more families when the abstinence advice is ignored. It's always heartwarming to go to a shotgun wedding of two teenagers. And why do you need daycare when we all know that women should stay home to care for the children? I'm sure a 16 year old dropout could find a good paying job to support a family in today's economy.

Eagle Forum (EF) also wants to ostracize the gay members of our families and ban books from libraries that they deem offensive.

The group is also part of the black helicopter crowd opposing the North American Union, the NAFTA Super Highway and a single currency of the US, Canada and Mexico dubbed the "Amero."

But the reason they endorsed America's Mayor is (surprise)his stand on immigration.

Phyllis Schlafly: "Lou's championing of the illegal immigration issue has been truly inspiring. His fight to protect his community from the crime and overcrowding caused by illegal aliens highlights the need for stronger enforcement of our immigration laws."

The EF joins another Barletta fan, David Duke , with a timely endorsement.

Note: Republican 10th CD candidate Chris Hackett was endorsed by the PA chapter of the Eagle Forum in the primary.

Did they ask a certain "other" female if she thinks Lou is pro family?

Why isn't this stop lou barletta guy all over this?

perhaps the stop lou guy isn't aware of the senorita

Last year, Phyllis Schlafly spoke on the campus of Bates College where , among other things, she “belittled the feminist movement as ‘teaching women to be victims,’ decried intellectual men as ‘liberal slobs’ and argued that feminism "is incompatible with marriage and motherhood." She then went on to top herself by claiming that a married woman cannot be sexually assaulted by her husband, saying:

"By getting married, the woman has consented to sex, and I don't think you can call it rape.”

Needless to say, those views caused a bit of controversy … controversy that has now reemerged at Washington University in St. Louis when school officials decided to honor Schlafly with an honorary doctorate:

Washington University's decision to bestow an honorary degree on conservative political activist and author Phyllis Schlafly has stirred outrage among some students and faculty.

Opponents of Schlafly's honorary doctorate formed a group on the social-networking website Facebook and had 1,023 members as of Monday evening.

But the university isn’t backing down … and neither is Schlafly, who granted an interview to a Washington University student newspaper where she complained that the protesting students have “too much extra time” on their hands and reiterated her view that wives cannot be raped by their husbands:

Could you clarify some of the statements that you made in Maine last year about martial rape?

I think that when you get married you have consented to sex. That's what marriage is all about, I don't know if maybe these girls missed sex ed. That doesn't mean the husband can beat you up, we have plenty of laws against assault and battery. If there is any violence or mistreatment that can be dealt with by criminal prosecution, by divorce or in various ways. When it gets down to calling it rape though, it isn't rape, it's a he said-she said where it's just too easy to lie about it.

Was the way in which your statement was portrayed correct?

Yes. Feminists, if they get tired of a husband or if they want to fight over child custody, they can make an accusation of marital rape and they want that to be there, available to them.

Yes, I certainly do.

She also co-founded "Conservapedia", which is the religious/conservatives' Wikipedia:

What Would Jesus Wiki?

You know, they need their "own truth"...not THE truth!

wow Dan, you need to look at the nancy boy post on my blog. whoever made it must have met you.

First David Duke of the KKK endorses Barletta, now this. Someone needs to take Lou Barletta speed dating, because he certainly needs some new friends.

As I've mentioned, numerous times, on my website (http://www.stoploubarletta.com), Lou Barletta is a horribly flawed political candidate and I fully expect him to embarrass himself in November. Sadly, he'll also be embarrassing the Republican Party, too.